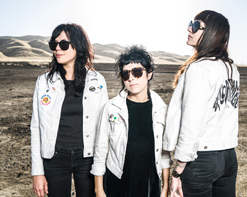 Go ahead and call The Coathangers a girl group if you like. They won’t mind.  Julia “Crook Kid” Kugel and her band-mates are nothing if not students of rock history, and they recognize the great ’60s girl groups for what they were: pioneers, occasional proto-punks, subversives armed with attitude, artists not too sweet to be tough (and vice versa) and loud, clear voices in an industry that hasn’t always been kind to women. Moreover, it’s possible to draw a line straight from the music of tough-minded minimalists like The Shaggs and The Slits straight to the Coathangers’ primeval sound. The Coathangers aren’t running from any of that. They honor their antecedents in the best way possible: with smart, sharp, straightforward, gutsy songs and performances.

But calling the Coathangers a girl group is a little reductive, too. The Atlanta trio has always drawn from a broad range of influences: catchy, brutal ’70s punk, vintage bubblegum pop and movie soundtracks, Motown, garage rock, even confrontational comedy and performance art. That’s all made apparent on Nosebleed Weekend, the band’s fifth album, and one that critic Robert Christgau dubbed a breakthrough. (“Ready to rule American punk,” the Dean wrote of the group in his top-marks review.) “Down Down”, the single from the set, suggests the band has developed a taste for early grunge as well. The Coathangers’ razor wit has always been in place — this is a group that once named a song “Shut The Fuck Up” with less irony than you can imagine — and now their ambition is evident, too. The Coathangers spike “Down Down” with a radical mid-song break in rhythm and groove; it’s audacious and snotty, and it works perfectly.

Matt Odom’s kinetic clip for “Down Down” can’t be pinned down easily, either. Its antecedents are pleasantly scrambled: for instance, the members of the band appear on a tiered riser similar to those used on vintage TV sound-stages during performances of girl groups like The Shirelles. Even the microphones look old. But he’s superimposed digital effects and designs over the footage — and although The Coathangers dress, dance and move like children of the ’60s, there’s an undercurrent of punk danger evident in everything they do. Halfway between the clip, the beat changes — and Odom turns the video upside down. The director drops us into the sort of crowded garage-rock venue that The Coathangers customarily play, and in their element, the three musicians drive the audience into pure delirium.

It’s our profound pleasure and a genuine joy to be a continuous part of the Suicide Squeeze promotional team. We’ll have CDs and other goodies from The Coathangers for contests and giveaways and we do hope you’ll dig this outstanding clip and hit us up. And if you’d like to check the band out this summer when they come to your area on tour, let us know and we’ll hook you up! Please don’t hesitate to let us know what we can do on our end to encourage you to support this hard rocking musical tsunami! You can reach out to Andy Gesner and the HIP Video Promo staff at (732)-613-1779 or email at info@HIPVideoPromo.com. You can also visit www.SuicideSqueeze.net for more info on The Coathangers.