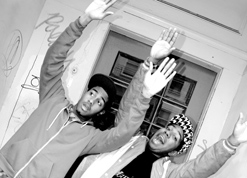 Greetings programming friends far and wide! It’s Andy Gesner and the incomparable staff from HIP Video Promo ring. Every year, the hip-hop spotlight seems to shine on a different city and its distinct style. After the national success of “Still Tippin’”, 2005 was all about the H-Town sound. Then, “Vans” and “Yadadamean” turned our attention to the Bay area and the hyphy movement. So where to next? There’s no way to know for sure, but all signs point to Chicago. The recent mainstream success of Kid Sister and Flosstradamus – not to mention the latest bestselling albums from Lupe Fiasco and Kanye West – have inscribed the “Chi sound” and Chicago style on the consciousness of hip-hop nation. It’s arty, minimalist, clever, consciously old-school, immediate and appealing to indie rockers, alt-rappers, hip-hop heads, and commercial radio listeners alike. And no group epitomizes Chicago’s sound and stance more than The Cool Kids do.

Their debt to classic rappers (Rakim, EPMD, A Tribe Called Quest) is apparent in every record they make; their first single borrowed Nas’s promise to “bring ’88 back”. With their baseball caps, tight Run-DMC jeans, and big shades, Mikey Rocks and Chuck Inglish look like old-school emcees. But like much of the music that’s currently come from the Chi, their singles are so straightforward, assured, and approachable that they feel daring, cutting-edge, instantly appealing to adventurous listeners. “Black Mags” has been in heavy hipster rotation ever since its release last autumn; Pitchfork loves it (their set at the 2007 festival hosted by the magazine was a huge hit), and, prompted by the success of the song, Rolling Stone called The Cool Kids one of the ten acts to watch for 2008. But don’t mistake this duo for a crossover act – they’re pure hip-hop, and they’ve got the associations to prove it. Last year, they collaborated with reigning titlist Lil Wayne, and they’ve been touring the country with M.I.A. No upcoming album is any more anticipated by rap fans than theirs.

While we’re waiting for When Fish Ride Bicycles to drop later this year, we’ve got the singles and their accompanying videos, and they’re fantastic: propulsive, immediate, brassy, dripping with style. Joe Esquivel’s visually-stunning black and white clip for “Black Mags” heightens the duo’s mystique and situates them within a vital rap tradition. Just as the Houston emcees have their Cadillacs, the Pack have their sneakers, and Lupe has his skateboard, Mikey and Chuck have their BMX bikes. They boast about them, walk them to the curb, and cruise through the city streets on them, passing highways and stop signs, freight trains, crumbling brick warehouses, alleys, ancient Midwestern tenements. There’s plenty of fantastic bicycle footage in the “Black Mags” video, and the group of trick riders who back up the emcees are impressive street-corner talents. But the emphasis here is on the two emcees, who, whether on their bikes or off, address the camera with confidence, attitude, and good humor. Esquivel spikes the video with off-kilter and slightly unsettling animations: a cat on a stoop, a bumblebee buzzing around the handlebars, a crowd cheering from atop an overpass, a gigantic plane soaring above the tower blocks. It’s a gritty world they inhabit, but one filled with cartoonish irruptions, weird magic, wit..

It is a huge pleasure for us to once again have the opportunity to work together with Seven Bedard and everyone at Chocolate Industries to bring you this dynamic new clip. The Cool Kids will be performing in select markets this Spring so please let us know if you’d like to set up a video interview with them if they are in your area If you need more info, call Andy Gesner at 732-613-1779 or e-mail us at info@HIPVideoPromo.com. You can also visit www.ChocolateIndustries.com to find out more about The Cool Kids.