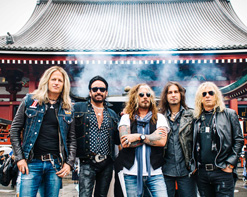 After wrapping up over a year of touring in support of the acclaimed Make Some Noise and the brilliant live album Live & Louder, it seemed like The Dead Daisies were ready to finally rest up and begin to work on their follow up effort. They treated fans to a steady stream of excellent recap videos and even posted updates on social media of them in the studio beginning work on their next album. So imagine fans’ surprise when the band unexpectedly dropped the brand new animated video for the live favorite “She Always Gets Her Way (All The Same)” via Billboard.com!

Between performance videos like “Join Together” and “We’re An American Band” to bigger production clips like “Song And A Prayer” and “Make Some Noise (Live And Louder),” the Daisies seemingly pulled out every stop in the music video arsenal over the past 18 months. Viewers were treated to almost every kind of presentation possible. Almost.

For a band that always delivers top notch graphics and artwork, creating an animated video is the next logical step. The video is the work of director Josh Goodswen and animators Monkeyshine Studios, who bring the Daisies to life with a cheeky tale of a little bit of love, a whole lot of lust, and of course a healthy dose of rock and roll. Harkening back to the vibe of the popular Rock ‘N’ Roll Comics series from the early 90s, each band member is brought to life with just the right amount of character and signature look. David’s Flying V, Brian’s double kick drum, Doug’s Les Paul slung low, and Marco’s four string axe all come to life with a minimalist perfection.

Frontman John Corabi is given the most in depth treatment as the unwilling pawn to the wildly sexy vixen who lays eyes on him and digs her claws deep. From the moment he lays eyes on her in the front row of the show, he’s hooked. Along the way she makes his life nothing short of insufferable. Smashing furniture, running up debt, verbally berating him, and even tossing a priceless Hendrix-autographed SG into the pool are par for the course. There’s just one problem…. he’s addicted and secretly loves all of it! Circle back to the lusty interaction between the two and their undeniable chemistry and it’s pretty clear that everyone wins in this relationship.

There is no other rock band quite like The Dead Daisies, and we know that this is a video that will get a ton of excellent traction with programmers and viewers alike, so please let us know what we can do to help get it into your programming! These tenacious rockers are impossible not to root for and rest assured we’ll have plenty of outstanding Dead Daisies merch to set up online/on-air contests and giveaways throughout the campaign. Get in touch with Andy Gesner and the HIP Video Promo team at (732)-613-1779 or email us at info@HIPVideoPromo.com for more info on The Dead Daisies.