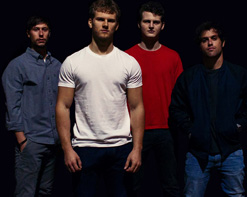 The Dice are a four-piece rock/power pop group from Ferrara, Italy. Making word-wide waves in the sea of music can be challenging when you’re stuck in a small town… Especially if you’re rocking electric guitars in a music scene made up of traditional Italian pop artists. With their blend of rock, pop, and surf, the band has been fighting to make a splash since 2009. Their new album, Showcase Come Alive might just do the trick. The brand new music video for ”Streetlights” puts the band on a new level, showing just how much they’ve grown since their formation 8 years ago.

They say an artist is their story, so let’s take it back to the start. Freshman year of high school, brothers, Enrico and Giulio Testi wanted to start a band. They did what most nowadays are too afraid to do: bring it back to the basics. The brothers put up some flyers and soon scouted Nicolo Tumiati and later on, Giovanni Zabardi. Next step: Write some songs. Coming from such a narrow-minded music community, the question arose: “Do we sing in English or Italian?” Lucky for international fans like us, these young men had learned exceptional English at a young age through their obsession with music and art. 8 formative years later, after a few changes in the band, The Dice have released a brilliant record entitled, Showcase Come Alive.

The new album features a sampling of many styles and influences from The Dice, making it their most diverse release to date. The 10 track album takes the listener through the band’s youth. The boys absorbed endless music through their teens, and released their emotions onto tape for our listening pleasure. Their single, “Streetlights” is telling of the expression on this record with heart-pounding drums, a walking bass-line, a screaming guitar solo and a punchy, hooky vocal performance to tie it all together. The video features a much edgier side to the band that hasn’t been seen before. The involvement of sexy girls, partying and underground clubs speaks for a non-compromising Dice, no matter what the climate of music is like around them. With hits like “Streetlights”, These guys have the potential to make tidal waves in any rock market around the world.

We are super excited to team up with The Dice to bring you the “Streetlights’” music video, and see it included in your regular programming. Don’t hesitate to let us know what we can do on our end to make that happen. Please contact Andy Gesner and the HIP Video Promo team at (732)-613-1779, email us at info@HIPVideoPromo.com or visit www.Facebook.com/theDiceOfficialpage for more info on The Dice.