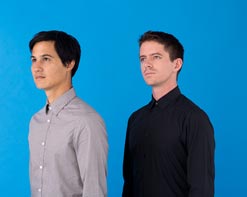 For the Dodos “the best time to make a record is right after you’ve finished one” says vocalist and guitarist Meric Long.

Having just wrapped up the sessions for their previous record Carrier, and fired up on the level of comfort achieved with brothers Jay and Ian Pellicci at Tiny Telephone studio, the duo immediately began laying to tape the batch of songs that would result in their latest and sixth record, entitled Individ.

“There were things I didn’t want to forget, sounds that we had just scratched the surface of making that record that I wanted to capitalize on. Songs came together easily, there was not a lot of questioning, just moving ahead with the feeling that we were on the right track. We were freed up to do whatever came naturally” says Long.

Individ’s first single “Competition” is a shining example of this proclivity, built on dueling guitar lines that overlap above and below a persistent drum beat as Long’s assured vocals soar above it all.

The companion video for “Competition” also seeks to capture the spirit of doing what comes naturally, and this case it might not be exactly what you’d think. The track begins with the Long and drummer Logan Kroeber backstage, quietly relaxing and strumming an acoustic guitar before being called to the stage. But instead of getting on stage for a rock and roll show, Long erupts into a blistering dance routine that falls somewhere in between Flashdance and Napoleon Dynamite. Long told NPR that “Growing up I had two older sisters who were both into dance. I would go to their performances and secretly kind of wish I was on stage.” The Katie Gaydos choreographed routine brings in Kroeber for some sweet synchronized moves, but even though it is a lighthearted piece Long also says it’s “meant to convey this idea of musicians feeling the need to do something out of the ordinary in order to compete or stay relevant.”

We’re all very excited to be continuing to spread the word about The Dodos and their new album Individ, out now on Polyvinyl Records. We’d love to hook you up with a copy or get you out to a show when they hit your market this spring, so get in touch with Andy Gesner and the HIP Video Promo team at (732)-613-1779 or email at info@HIPVideoPromo.com . You can also visit www.PolyvinylRecords.com or www.DodosMusic.net for more info on The Dodos.

For info about The Dodos’ previous videos, click HERE