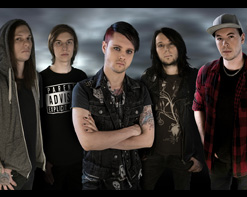 The Edge Of Reason

Energetic, engaging lives shows. A dedication to the post hardcore genre. Most importantly, an innate ability to strike a perfect balance between melody and metal. These are the characteristics that define Regensburg, Germany’s outfit The Edge Of Reason.The band released their debut album, Broken But Not Torn, in 2017 to widespread applause from their rapidly expanding fanbase. The self-produced effort strikes a theme of dealing with psychological issues, the struggle to contain them on a day-by-day basis, and the insatiable desire to change them. It’s all heavy stuff, and guitarists Alex and Billy, drummer Niko, and bassist Dani all do their part, but once vocalist Ro Seven drops his soaring melodies on top while mixing in guttural growls, the nuances of these songs come to light, showing that The Edge Of Reason is more than just a bunch of angst-filled guys.

For the first single, “Is She Worth It,” the band tackles a theme many have felt before; girl problems. From their perspective, however, it’s a different kind of problem. Rather than themselves coping with stress from the fairer sex, they’re on the outside looking in on someone close to them enduring an unhealthy relationship. It’s a slippery slope, but these guys can see the red flags from a mile away.

The video for “Is She Worth It” encapsulates the raw energy and fury of The Edge Of Reason in an expertly executed clip. The band creates a hard rock palette under a rapid-fire change of colored lights. Each shot is meticulously shot and lit with the same precision of the 16th notes of the drop D and double kick firing underneath. An unexpected use of neon and black lights keeps the visuals moving as a story plays out side by side showing just how manipulative and destructive some relationships can become.

It’s very exciting for us to have the chance to help bring The Edge Of Reason to a new audience and to help them plant their flag on new soil. Please get in touch if there’s anything we can do on our end to help make this happen. Contact Andy Gesner and the HIP Video Promo team at (732)-613-1779, email info@HIPVideoPromo.com or visit www.The-Edge-of-Reason.de for more info on The Edge Of Reason.

Visit The Edge Of Reason