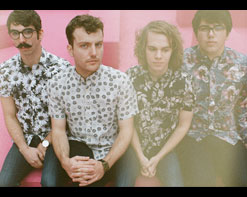 Canadian rockers The Elwins have had a very busy year to date. Supporting their sophomore album, Play For Keeps (Hidden Pony Records), has seen a never-ending tour schedule that has taken the band across Canada, Europe and Japan.

Currently on the road in  North America, the band’s latest single, “Show Me How to Move” is already racing up the charts. With rolling keyboards and a soaring chorus, the track truly captures the spirit of the band and the album.

The Elwins are still enjoying the success of their first single, “So Down Low,” which spent a whopping six months on the charts, peaking at #12 nationwide. You may also hear it being featured currently in the new Fido campaign!

“The song “Show Me How To Move” is about dancing and groovin’ around the dance floor,” says Matthew Sweeney of the band, “…and what better way to showcase that then to show dads…breaking out their moves!” Fun Fact – The video actually features two of the band member’s dads and their uncles!

In trying to showcase this old-fashioned “dad” vibe, directors, Adrien Vieni and Zach Rose used episodes of the American comedy series, Tim & Eric Awesome Show, Great Job! as inspiration. “We had a lot of fun trying to figure out how to keep the vibe loose and goofy while still making it a visually appealing video. At the end of the day though, it was really our lead, Drew that made the video what it is- It wouldn’t have worked without him. The charisma he brought to the role was perfect, and we couldn’t have asked for a better dad.”

Here at HIP Video Promo we’re all incredibly excited to be working with this incredible new band and the infectious new video. We would love to help you catch the band on the tail end of their Canadian tour, so please get in touch asap to make that happen! If you’d like more information please contact Andy Gesner and the HIP Video Promo team at (732)-613-1779 or email us at info@HIPVideoPromo.com . You can also visit http://www.TheElwins.com for more info.