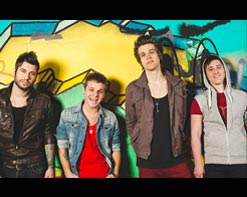 Emerging on the scene comes Chicago’s own, The Fall Four. A delightful blend of pop and contemporary rock genres, this is a band you’ll be sure not to miss. HIP Video Promo is pleased to introduce their exciting new video clip for the single “Siren Song.”

This new outfit blasted right out of the gate, teaming up in Los Angeles to record with producers Mudrock and Khris Lorenz, known for his work with the Plain White T’s, One Direction, and T. Mills, and then headed to Minnesota to work with James Harley who has worked with the one and only Prince. Despite the fact that the band has only been together for a few, short months, their pedigree is long and impressive. Frontman Kyle Driscoll stint in Chicago staples The Frantic and his bandmates time in Emarosa and Rosaline have given this band an undeniable head start.

With inspirations toward contemporary artists such as The Summer Set, We the Kings, and The Cab, The Fall Four has quickly started gaining a successful following. Social media sites have given the band a foot in the door, but it was there with their first ever performance in May of this year that brought them recognition. Playing to a sold out room at Beat Kitchen in Chicago, fans took to a liking to this emerging band who have been compared to One Direction and Hot Chelle Rae.

Following their first released single comes the tune “Siren Song.” Bringing forth a wide range of creative energy, the video clip introduces what The Fall Four is all about. Viewers become captivated by this fun-filled ride where there are no limits or rules. Scenes of youth and energy fill the screen, and in no time you find yourself singing along loudly. Director Kyle Cogan presents “Siren Song” that is done is such fun, delightful ways that it has left us wanting more!

The Fall Four has emerged on the music scene with high energy and strong, catchy hooks. Although they are new to the scene, their songs captivate and inspire, especially with their new clip, “Siren Song” and we hope you’ll get behind this band on the ground floor. For more information on this exciting new band, please contact Andy Gesner and the HIP Video Promo staff at (732)-613-1779 or email us at info@HIPVideoPromo.com /a>. You can also visit www.Facebook.com/TheFallFour/ for more info.