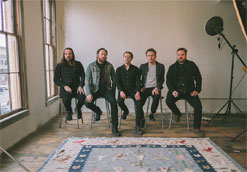 The Get Up Kids

The Get Up Kids are all grown up but still live through their adventurous young souls. Keeping the late 90s and 2000s culture alive, they are the pinnacle of punk music; their records have defined many fans’ formative years and still catch them during confusing and intense times. Being a classic act and pulling it off for almost two decades is difficult, but these guys evolve with ease as their sound shifts to a more measured and mature approach. Watching them grow up before our eyes with hyper melodies, heartfelt lyrics, and a punk drive has been rewarding as they refuse to let go of the message, “we’re loyal, like brothers! Just us versus all the others!”

At the forefront of the second wave of emo bands in the late ’90s, The Get Up Kids are from Kansas City, Missouri. Being known for having countless perfect records from start to finish, they are composed of Matt Pryor on vocals and guitars, Jim Suptic on guitar, Rob Pope on bass, James Dewees on keyboards, and Ryan Pope on the drums. They were certainly ahead of their time as they have thrashed around the charts and left a permanent mark on the hearts of fans and present-day acts. They released their first album in 1997, Four Minute Mile, which was followed by Something to Write Home About in 1999, which peaked at #31 on the Billboard charts. After a brief breakup, they returned for their 2011 release There Are Rules and are now rising up to influence a whole new generation while staying true to their original sound with the Kicker EP.

The video for “I’m Sorry” (which comes off Kicker) opens up with a kid getting pushed to the ground. It’s shocking visuals like this that scream for the raw genuine punk that has been missing in current alternative music. Directed by Shawn Brackbill, the band now tells their story through the perspective of children with the curiosity of a cat. Originally shooting their music videos surrounded by punk girls, their taste has changed as it tells the story of pre-teens seeking revenge against the band for ruining their days as it transforms into a party with mutual understanding. As the video closes their spirit remains vital; nothing lasts forever except their genuine energy and dedication to punk music.

We’re honored to be working with The Get Up Kids, and we hope you embrace the new clip for “I’m Sorry”. We’d love to see this video added into your cherished programming and online presentations in a timely fashion! Rest assured we’ll have plenty of The Get Up Kids merch available for on-air contests and giveaways so don’t hesitate to get in touch. For more information on The Get Up Kids, please contact Andy Gesner and the HIP Video Promo team at (732)-613-1779 or email us at info@HIPVideoPromo.com. You can also check out www.instagram.com/TheGetUpKids and www.facebook.com/TheGetUpKids for recent updates on The Get Up Kids visit www.TheGetUpKids.com for more info.

Visit The Get Up Kids