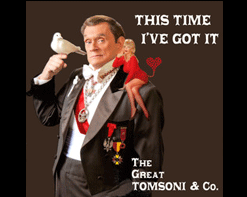 Once again in time for this year’s Halloween season, Music Avenue Records is bringing you last year’s big hit “This Time I’ve Got It” featuring The Great Tomsoni & Co. and a number of other top Las Vegas artists and entertainers. The song, co-written and produced by songwriter/ producer/ artists Randell & Schippers and the video are now available at iTunes and YouTube.

You may have seen The Great Tomsoni recently appear on the new incarnation of The Arsenio Hall Show and seen how clearly adored the man is amongst his peers. In addition to his own award winning magic show, world famous magician John Thompson, with his wife and partner Pam Thompson also known as The Great Tomsoni & Co, works closely with top Las Vegas magicians and performers Penn & Teller who also appear in the video along with Randell & Schippers and performers from the Las Vegas cast of the Tony Award winning show “Jersey Boys”. Mad scientist Tomsoni, who seeks to create a new formula to woo his love interest, successful Las Vegas actress Joelle Righetti, gets a surprise boost from Penn & Teller, while his assistants and band provide him help and musical backing in support of his quest to win the girl of his desires.

Randell, who has three of his many well known songs featured in “Jersey Boys”, the story of Frankie Valli and the Four Seasons, says “it’s fabulous to have these wonderfully talented members from the Las Vegas Jersey Boys cast featured in this video.” The video was done by producer, director, editor Emery Emery.

John Thompson has also created magic for many other famous magicians, including Siegfried and Roy, Lance Burton and Criss Angel and has received ‘Magician Of The Year’ awards from both the Society Of American Magicians and the Magic Castle among others. He is also an accomplished actor and musician, having appeared in movies, on TV and on well known recordings. With its campy story and top artists, the record and video ‘This Time I’ve Got It’, promises great fun, and it is our hope that this video will become a regular inclusion in your annual seasonal programming. For more information you can call Andy Gesner at (732)-613-1779 or email us at info@HIPVideoPromo.com. You can also visit www.DennyRandell.com for more info on The Great Tomsoni!