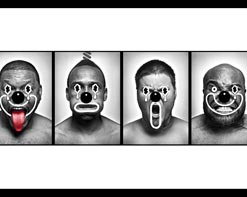 Drapetomania (pronounced druh-pet-oh-may-nee-uh), the first official record from The Green Seed, has all the gusto and urgency of a debut. Brimming with lyrics of fury courtesy of emcees R-Tist and C.O.M.P.L.E.T., the stabbing attacks of dynamic DJ duo FX and Jeff C, and a lush soundworld layered with rich textures and trunk-rattling beats, Drapetomania is a feast for the ears, a Loveless for heads steeped in Buhloone Mind State (and vice versa).

R-Tist has long been a fantastic producer, one who mixed MPC mastery with live instrumentation. Still, joining forces with the production crew at Birmingham-based label Communicating Vessels — namely, producer Jeffrey Cain (Remy Zero, Isidore), engineer Kyle Ginther, and mastering guru Paul Logus — has taken his beats to dizzying new heights. You’d be forgiven for thinking that Drapetomania wasn’t the product of the Dirty South but rather the blunted grit of J Dilla’s Detroit or the otherwordly production of Lex Records. Drapetomania is no homage though, it’s a unique blend of heart, laughter, and guts.

Speaking of Lex Records, Drapetomania is also a feast for the eyes thanks to the astounding artwork of enigmatic art collective EHQuestionmark, the design collective behind much of Lex’s output, including records by Shape of Broad Minds, Neon Neon, and DOOM.

In fact, it was EHQuestionmark who suggested the album title: Drapetomania is a bit of 19th century pseudoscience — the “disorder” causing a slave’s urge to flee. The idea of drapetomania inspired the eerily psychedelic minstrels that adorn the album’s artwork, which looks especially striking as an LP. With that last conceptual detail in place, Drapetomania gained extra heft as a work of art, though none of that matters without the strong material that lives within the grooves.

When it came time to create the video for “Jude Law” it was clear that a top notch visual was absolutely crucial. Enter Kris Daw (who also directed Shaheed & DJ Supreme’s “Right Now” video), who has created an animated video that has all the depth and darkness of Sin City & The Watchmen, except in this video the mysterious members of The Green Seed are the antagonists. With their own style of vigilante justice, they use the power of music (literally) to dish out the necessary treatment to the soulless minions of the appropriately named Suits Savings & Loan. For all of those who have been under the boot of the financial institution in this world, it’s a wickedly satisfying piece of cinema you won’t want to miss.

Drapetomania often contemplates bondage — artistic, romantic, etc. — but, ultimately, it’s a soundtrack to Freedom and whatever comes next. “Jude Law” exemplifies that feeling of liberation, and we’re confident this is a video you won’t want to miss out on including in your programming. For more information please e-mail info@HIPVideoPromo.com . You can also visit www.CommunicatingVessels.net/ and www.Facebook.com/TheGreenSeed/ for more info.