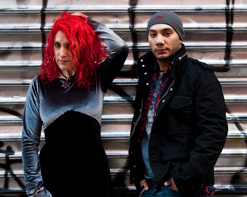 Howdy programming friends! We’ve got a package of punk-i-tude barreling your way from the Lower East Side of New York City from a band that just might be that alternative solution you were looking for. With chili-red hair and a middle finger to the world, Sam Shaber leads her pack of wild wolves known as the happy problem. They’re pissed, they’re geared up, and they’re driving a freight train right off the tracks in their new single, “Matador.”

Founder, frontwoman and lead guitarist Samantha is a refugee from the folkie troubadour circuit, where every year she drove 50,000 miles by herself, playing over 200 gigs nationwide until, in 2008, she traded in her Martin for a Telecaster and turned it UP. Living in Los Angeles at the time, Shaber founded the happy problem as a cross between the snarky aggression of Green Day and the feminine power of No Doubt, recording an EP with players from Gnarls Barkley and The Fray. Moving back in her hometown NYC, Sam put together a new army of darkness, with bassist Joe Nerve, formerly of Guns N’ Roses offshoot Bumblefoot, and powerful drummer Tony Cortes, formerly from heavy rock outfit Hybrid Dawn. The result is their brand new full-length follow-up, Head Case, recorded in the murky Gowanus section of Brooklyn and self-produced by Shaber. The album has 9 original songs and a unique indiepunk take on 2 covers, “Material Girl” and the unexpected Petula Clark classic, “Downtown.” It has received early rave reviews on iTunes and commercial airplay on WDHA 105.5-fm among others.

the happy problem’s music has been featured on hit shows such as “Greek,” “Privileged,” “Teen Mom,” “16 and Pregnant,” “Engaged and Underage,” and many more. Singer Sam is also the voice behind the song “Harder Deeper Faster,” featured during an Olivia Wilde striptease scene in the upcoming Weinstein film BUTTER, starring Hugh Jackman, while also duetting with Molly Ringwald on the title theme to ABC Family’s hit show “Secret Life of the American Teenager.” the happy problem are now busy scheduling their summer tour to promote their new record.

The video for the first single, “Matador,” just recently went live on YouTube and has received 2,000 views in the first week based on word-of-mouth and helped by video tastemaker site MusicThirsty.com, which picked up and featured the clip. “Matador” depicts a club of wrecked hipsters, sliding quickly from sleek and beautiful to sloppy and unbearable, as a harried waitress and a lovesick bartender attempt romance amidst the destruction. The theme of the video fits perfectly with this indie punk song about the drunken hipsters smoking and teetering on their high heels between the F train and Shaber’s front door every night on the Lower East Side.

We are stoked to bring you a video full of fun kinetic energy to help turn your problems into one happy solution. We’ve got extra copies of Head Case here at the office that we’d love to send your way for any giveaways and contests – just give us the word! If you need more info, call Andy Gesner at 732-613-1779 or e-mail us at info@HIPVideoPromo.com. You can also visit www.thehappyproblem.com to find out more about the happy problem. This is indiepunk for a new generation and it’ll get your happy back!