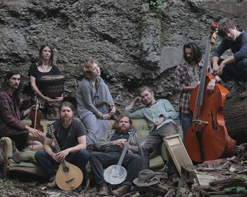 The Hills and the Rivers

There is no connection in human history stronger than a familial bond, and the bloodline runs deep in the Pittsburgh, PA street folk band The Hills and The Rivers. Made up of four members of the Hill family and four fellow contributors to the 4th River Music Collective, The Hills and The Rivers have crafted an original blend of roots, folk, and indie music with the common thread of keeping all the instruments acoustic and organic. Their newest single “The Fool” serves as a proper introduction to the world of The Hills and The Rivers with the authentically branded music video to match.

“The Fool” is the lead single off the band’s forthcoming album entitled, The Fool and The Magician, set for release on May 18th. The group’s first album, The World, took the Pittsburgh scene by surprise in the Fall of 2014 with a fresh sound that had never been heard before. The troubles of the average band in the 21st century do not apply to this family band, as they recruited buskers off their city streets to fill out their steady lineup. With their name finally out in the world, they released their second album Apocalyptic Dreams in 2016. After their first album, The Hills and The Rivers were road ready. Living the nomadic life is something that comes naturally for them, and they’ve now adopted a habit of touring regularly.

Just coming off a five week full U.S. tour, the group is ready to rock with a strong base to launch “The Fool” into the stratosphere. The single showcases the signature fusion sound of the Hills and The Rivers on a whole new level of songwriting. Banjos, mandolins, and soaring harmonies flow in and out of the raw mix while steady percussion keeps listeners on their feet, ready to dance around the fire. The music video, shot by fellow 4th River Music Collective artist The Childlike Empress, provides a sneak peek into a day in the life of TH&TR. The great outdoors, a family bonfire, and man’s best friend encompass their grassroots vibe, and a love story to tie it all together.

We’re profoundly thrilled to be working with The Hills and The Rivers to bring you this raw and real family project. It’s our sincere hope that you and your viewers will flock to “The Fool”, share it on your socials, and add it to your programming in a timely fashion. Rest assured we will have plenty of outstanding The Hills and The Rivers merch to set up online/on-air contests and giveaways throughout the campaign. Don’t hesitate to let us know what we can do to help you spread the importance of The Hills and The Rivers. Please contact Andy Gesner and the HIP Video Promo team at (732)-613-1779, email us at info@HIPVideoPromo.com.