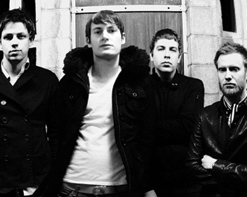 A rocking hello to all of my music video loving brethren! It’s Andy Gesner and the staff from HIP Video Promo, here once more with an intriguing new clip from a most excellent indie band. If you were atSXSW ’05, you heard about The Hourly Radio: their performance there was the talk of Austin. At the time of the gig, the band was barely a year old, but hours of diligent practice had made them a tight, no-nonsense modern rock unit. Already popular in their hometown of Dallas, the SXSW showcase attracted the interest of the indie-rock cognoscenti: not only did the quartet sign a deal shortly thereafter, but they toured the country with Stellastarr* and Clap Your Hands Say Yeah. The success of The Hourly Radio proves, once again, that the best way to draw hipster attention is to disregard hype completely, and simply to rock.

Which isn’t to say that The Hourly Radio don’t sound current. Frontman and songwriter Aaron Closson possesses an ethereal (and slightly unsettling) falsetto that could make Thom Yorke envious. When drummer Adam Vanderkolk and bassist Tim Jansen lock into a groove, they do so with the inventiveness, supple power and precision of October-era U2 and early New Order. Ryan Short’s edgy, slashing twin-guitar arrangements have drawn comparisons to Franz Ferdinand and Interpol’s Turn On The Bright Lights. Yet no matter how atmospheric and angular they become, each Closson-penned song is built around undeniable pop hooks. Infectious single “Crime Does Pay” prompted Spin to name The Hourly Radio its Band of The Day last summer. Since then, critics have raced to praise the quartet and their debut album –Billboard Magazine’s Jason MacNeil even named it the best record of 2006.

History Will Never Hold Me is a bracing and often dark excursion; an inviting tangle of barbed-wire riffs, telegraph beats, and vocals that alternate between the sweet and the spectral. “Deaf Ears”, the second single from the set, makes electrifying use of Closson’s head voice: the singer weaves a deft melody over the track, slipping effortlessly into the falsetto passages. The tension between the controlled fury of the band and Closson’s smooth tone is characteristic of The Hourly Radio’s music: it deepens the storytelling, and adds to a sense of raised stakes.

That veil of mystery stretches also to The Hourly Radio’s videos. Asiel Norton’s darkly humorous clip for “Deaf Ears” literalizes Closson’s metaphors: this is a song about missed connections and the refusal to engage. The band plays in the living room of a creepy old house, delivering their narrative to the camera. Another young man stalks these frames, too – and although he seems hell-bent on ending his own life, the musicians behave as if he isn’t even there. The main character tries to do himself in with rope, a pistol, and anything else he can find, but Closson and the rest of The Hourly Radio sip tea and ignore him. This could have been rendered in slapstick, but it’s to Norton’s credit that the tone of the “Deaf Ears” clip is more disturbed than satirical. Pictures of Sigmund Freud and Richard Nixon may hang on the walls of the house, and the suicidal man may be fleeing from a father figure, but his story isn’t pathetic: it’s downright macabre, unsettling, weirdly fascinating.

Many thanks to Tami Thomsen and the crew at Kirtland Records for all of their hard work and hooking us up with plenty of copies of History Will Never Hold Me for all of your on-air giveaway needs! You can also catch The Hourly Radio all across the country in the month of March, including their appearance at this year’s SXSW Festival, so get in touch if you’d like to catch up with the band for a video interview. If you need more info, call Andy Gesner at 732-613-1779 or email us at info@HIPVideoPromo.com.