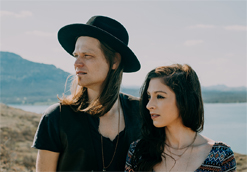 Have you ever been watching TV, heard a song, and thought “that sure is a good song, I wish I knew who was singing it…”? Well, there’s a good chance that it came from either Maggie McClure or Shane Henry (aka The Imaginaries). Between the two, their songs have been featured in numerous shows like Dr. Phil, Cougar Town, The Real World, The Night Shift, and The Young & The Restless, as well as in many movies and commercials. In fact, Maggie had a recurring role on ABC’s The Middle where she both acted and sang.

It’s also equally possible that you’ve seen them performing their songs live. Shane spent 30 days on the B.B. King Festival Tour, opening for B.B. himself. He’s also supported artists such as Etta James, The Neville Brothers, Jonny Lang, & more and has performed at iconic venues such as the Hollywood Bowl. Maggie herself has performed over 1000 shows in her career (opening for Sara Bareilles and set to open for Paul Reiser in 2019), playing coast to coast everywhere from Rockwood Music Hall in NYC to Hotel Cafe in Los Angeles.

When they come together like an Americana Voltron is where the magic really happens. Maggie and Shane are a married couple and release holiday music together annually. Their original holiday songs can be heard each year on radio stations, Hallmark Channel Movies and in retail stores such as Walgreens, Macy’s and FedEx worldwide. Maggie and Shane launched their new band together, The Imaginaries earlier this year and their debut release is their cover of holiday classic, “Merry Christmas, Baby”.

The “Merry Christmas, Baby” video is as charming and festive as you’d expect from these two. It’s a bouncy, behind the scenes romp in the studio that captures the recording process of the single, with each and every note recorded by the duo. Their chemistry is apparent and a loving gaze is shared between them while singing, making it clear that this song carries a little more weight to them than just a convenient cover song. And to show it’s a true family affair, keep your eyes peeled for a special cameo from their furry, four-legged friend.

As an added bonus, they’ve also included their original holiday composition, “First Thing On My Christmas List.” This upbeat, nostalgia-inducing number is destined to become a holiday annuity, checking all of the right boxes, like their own little advent calendar. Candy canes, mistletoe, Christmas trees, stockings, and more are all celebrated as they adorn their home with all of the right trimmings to get themselves into the holiday spirit.

Christmas is coming fast, but we know there’s ample opportunity for you to get these wonderful videos into your holiday programming, so please let us know what we can do to get it into programming for this year (and every year after)! Please contact the HIP Video Promo team at info@HIPVideoPromo.com or call (732)-613-1779. You can also visit www.HIPVideoPromo.com, www.imaginariesband.com or www.maggiemcclure.com for more information on The Imaginaries, Maggie McClure, and Shane Henry.