The Like “What I Say And What I Mean” 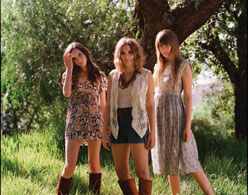 Artist:
THE LIKE
Label:
GEFFEN RECORDS
Video:
“WHAT I SAY AND WHAT I MEAN”
Director:
Mike Myerberg
Add Date:
September 20, 2005

Hello to all of my esteemed music video programming friends! It’s Andy Gesner and the staff at HIP Video Promo with some more late summer music video greatness! Here at HIP, we do most of our work with innovative emerging acts. While we truly admire all of our artists, the challenging nature of their music will sometimes worry us – we’ll ask ourselves if the world is ready for these departures from conventionality, or whether the courageous experiments that excite us so much will fall on deaf ears. So it is with this established background of behind-the-scenes hand-wringing that we send you the debut clip for The Like, a Los Angeles trio recently signed by our friends at Geffen Records. Because this time, we’ve got no trepidation whatsoever! We can honestly say that never before have we felt so confident that the world would embrace a band and its accompanying video. We’ve been doing this for too long to believe that anything is a “can’t-miss”, but these three young women are the closest things to it.

The Like have it all: great melodies, a great sound, superior musicianship and pop hooks, enough immediacy to thrill teenagers and the requisite sophistication to set record obsessors swooning, and a look that feels tailored for the cover of music magazines. They’ve even got a terrific backstory, since they were just teenagers when they first began making music together. The Like sold those initial efforts through their beautifully-drawn website (named, in typically winsome fashion,  www.ILikeTheLike.com), and attracted enough attention for their music to land tour dates in support of Rooney, Maroon 5, and Phantom Planet. And their roster of famous friends extends to their families: bassist Charlotte Froom is the daughter of superproducer Mitchell Froom, and drummer Tennessee Thomas got her surname from the legendary Pete Thomas, keeper of the backbeat for Elvis Costello & The Attractions.

If that’s not enough to make you curious about Are You Thinking What I’m Thinking?, the trio’s debut effort, you’ve probably stumbled into the wrong business. Produced by Wendy Melvoin (best known for her supporting work in Prince’s Revolution), is a bright, bold, springlike collection of radio-ready pop songs. While some of the songs – most notably the indelible “(So I’ll Sit Here) Waiting” – are reminiscent of the most tuneful efforts of Britpop bands such as Ride, Echobelly, and Elastica, other moments are positively Beatlesque. Singer Z. Berg displays an astonishing range, alternately channeling the barbed innocence of Kristen Hersh and the weary intelligence of Sam Phillips. On “What I Say And What I Mean”, the set’s two-fisted lead single and easily the brashest and most shoutable song on Are You Thinking What I’m Thinking?, she’s even got a bit of Celebrity Skin-era Courtney Love’s poised impatience.

Director Mike Myerberg dresses the young women in some drop-dead gorgeous threads, and sets the act up on a green disk at the center of an Olympic-sized swimming pool. A battalion of synchronized swimmers surround the band, and splash and twirl in time to the song. Myerberg intersperses straight-ahead shots of the trio with high overhead views of the swimmers, who provide a Busby Berkeley-like elegance to the video. Some of their moves are truly astonishing in their power and grace, and their choreographed interpretation of “What I Say And What I Mean” is every bit as lyrical as the dancing in a Michael Jackson or Destiny’s Child clip. Z. Berg, however, follows the camera rather than the swimmers, chasing the lens with her eyes as she sings, and echoing the sexuality of the athletes with a pregnant stare caught somewhere between curiosity and desire.

Here at HIP HQ we are thrilled to bring you this exciting new clip from one of Geffen’s coolest emerging acts. Special thanks to Lisa Frank and Christian Taylor for allowing HIP to jump aboard The Like parade route. We have Are You Thinking What I’m Thinking? discs and other goodies from The Like for on-air giveaways and the band will be on tour throughout the fall in the event you would like to meet up with these lovely young women for a video interview or video ID . If you need more info, call Andy Gesner at 732-613-1779 or e-mail us at info@HIPVideoPromo.com. You can also visit www.Geffen.com.