The Little Ones “Lovers Who Uncover” 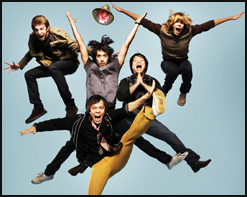 Greetings to my esteemed programming friends! It’s Andy Gesner and the staff from HIP Video Promo, back with a thoughtful and moving video from an independent band beginning to get widespread recognition. Since the release of their Sing Song mini-album, hailed as “one of the year’s most lovable indie-rock CD’s” byThe New York Times, the buzz about The Little Ones has electrified the underground. On weblogs, social-networking sites, MP3 lists, and elsewhere, deejays, record-store clerks, and tastemakers everywhere have been spreading the word and recommending this quartet to anybody who loves offbeat, melodic indiepop. The Los Angeles indie rock band has toured America and Canada with the Kaiser Chiefs and The Walkmen, played a stunning showcase set at SXSW, streaked across Britain with Tilly and the Wall and The Magic Numbers, all while securing rave reviews in Pitchfork and NME. At each stop, they’ve introduced more listeners to the sparkling brand of California indie-pop. Currently, the band is in the UK as part of theNME’s New Music tour (who called Sing Song “the best ”pop” album of the millenium. 9 out of 10.”), and they’ll come back to the States in time to appear at Bonnaroo. As modest and humble as the outfit might initially appear, don’t be fooled: The Little Ones are making international reverberations.

With its Jesse LeDoux (Chutes Too Narrow by The Shins, Achilles Heel by Pedro The Lion) album cover and its wistful track titles, Sing Song looks and feels like the perfect accompaniment for modern heartbreak. The songs are sunny and bright – but lead singer and frontman Ed Reyes’s beautiful arrangements conceal barbs. “Lovers Who Uncover”, the current single, is a fantastic singalong number complete with shouts and handclaps, and a sugar-coated melody that wouldn’t sound out of place on a Fleetwood Mac set. But listen a bit closer: it’s a song about miscommunication, and the passage of time, and the cost of maturity. Like all Little Ones songs, it contains layers of meaning and association. Here’s a group that’s most potent when they’re at their most subtle.

The heartbreaking clip for “Lovers Who Uncover” borrows its concept from “The Gift” by The Velvet Underground: a foolish lover mails himself across the country to the object of his affections. But there’s no cruelty or violence in this version of the story. This time, the tragedy comes entirely from misapprehension – and that makes it all the more painful. Unlike Waldo Jeffers from “The Gift”, the main character of the “Lovers Who Uncover” video isn’t kidding himself about his girlfriend’s affections. Instead, she’s trying her best to get his attention while he, halfway across the country, concocts his plan. She sends him Polaroids, calls him on the phone, and checks her mailbox regularly for a reply – but instead of giving her the quick ring she’d need to reassure her, he opts for the more spectacular (and time-consuming) gesture. By the time he arrives on her doorstep, she’s grown tired of waiting and left to find him on her own, leaving them literally on each other’s doorsteps!

As directed by the Terri Timely team (Joanna Newsom, Midlake, The Wrens), there’s plenty of humor and whimsy in the “Lovers Who Uncover” clip, too. We see the protagonist brushing his teeth and amusing himself across the box – and when his capsule is lifted into a mail truck or a shipping container, there are the members of The Little Ones, too, standing around the box and providing a romantic soundtrack for the adventure. But the prevailing feeling is one of great poignancy, and the viewer is left to ponder missed chances and confront the ways that the inevitable miscommunication between lovers can undermine the best intentions. Or, as weblogger Obtusity explains about the woman in the clip: “all she wanted was a phone call or some sign that he cared, because she has come to a decisive point in the relationship where she questions its future prospects. The man is under the impression that his one grand act will sweep her off her feet and make everything as it once was – but he fails to understand the thinking of his lover. In his eager preparation for his visit, he is growing farther and farther away from her.”

Risa Morley and the crew at Astralwerks have done it again and brought us a winning clip from a spectacular artist! They have also been kind enough to set us up with enough copies of the Sing Song mini-album for all of your on-air giveaway needs, so drop us a line so we can help you spread the word about this incredible band!. If you need more info, call Andy Gesner at 732-613-1779 or e-mail us at info@HIPVideoPromo.com. You can also visit www.Astralwerks.com, or www.WeAreTheLittleOnes.com to find out more about The Little Ones.