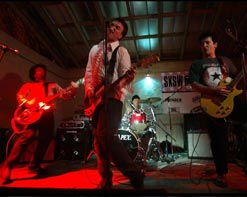 Some bands talk about the spirit of punk rock. Others do something about it. The Martinets are the living descendants and true disciples of the sounds that changed the face of rock ‘n’ roll. From the hot smoke of The Sonics and MC5 to the wildfire of The Stooges and The New York Dolls, the danger and excitement of that era is alive in their reckless racket. But The Martinets aren’t simply carrying the torch, they’re burning shit down. And right on cue we are thrilled to bring you their new video for “She Scares The S#*t Out Of Me.”

Aptly described as an “NYC supergroup” by famed rock radio bastion WFMU, The Martinets feature vocalist/guitarist Eamonn Bowles (the Fabians), bassist Dave Rick (Yo La Tengo, King Missile), drummer Roger Murdock (Ronnie Spector, Joey Ramone), and legendary guitarist/producer Daniel Rey whose resume includes records by the Ramones, the Misfits, D Generation, and Richard Hell, to name only a few. Together, they have been bashing out rock ‘n’ roll with a 1977 New Yawk City vibe for over a decade and a half and proven to be a Lower East Side musical tsunami to be reckoned with.

After making waves at the turn of the century with two albums of gritty, guitar-fueled mania on Scootch Pootch Records–2000’s Love! Hate! and 2002’s New Stories For Men– The Martinets didn’t return until 2011’s triumphant Comeback Tour for Tornado Ride Records.

This year, the band is gearing up to unleash their fourth and finest album to date, Rock And Roll Will Probably Never Die on MuSick Recordings. Jam-packed with 15 tracks of authentic protopunk power, it runs hot and heavy, with wide eyed, delirious energy and fist pumping urgency.

On the album’s lead single, “She Scares The S#*t Out Of Me”, Bowles spins a tale about his strange new lover like a slightly deranged street preacher as the band churns behind him, building tension until the chorus’ rapturous exaltation. The video – which compiles a bunch of amusing, 50s era stock movie footage, shows men cowering in fear at the feet of beautiful women. The female leads are indeed sultry and sexy, but these gents have learned their lessons the hard way (most of them, anyway).

We’re very excited to be working together with The Martinets and the folks at MuSick Recordings to bring you this stellar offering. If you need anything at all from our end to get this video into your programming, please don’t hesitate to be in touch. Contact Andy Gesner and the HIP Video Promo crew at (732)-613-1779 or email us at info@HIPVideoPromo.com . You can also visit www.MuSickRecordings.com/ for more info.