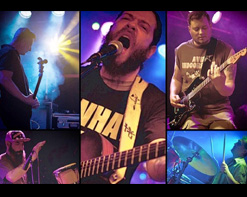 Some tales are too good to end in tragedy. Consider the case of The Mayan Factor, one of Baltimore’s most respected independent bands, and one with an international audience for its bold and idiosyncratic sound. When beloved lead singer Ray Schuler – known as Ray Ray to the wildly inventive rock group’s devoted fans – died unexpectedly in 2011, few expected the grieving members of The Mayan Project to carry on. The band did indeed go on hiatus in the wake of Ray Ray’s death. But a worldwide legion of fervent Mayan Factor devotees simply would not let the group shift off this mortal coil. On underground message boards and in independent chat rooms, believers in the spirit of progressive rock kept the flame burning, posting reverently about the band’s powerful performances and visceral songwriting, its clever use of Meso-American iconography, and the unquestionable instrumental excellence of its members.

Prompted by this outpouring of love, the surviving members of The Mayan Factor reunited – first to release archival material featuring Ray Ray’s searing performances, and then to create new music. The powerful-voiced Lenny Cerzosie of the fearless hard rock band Le Projet (which includes members of Candlebox and Sevendust) stepped into the vacant spot at the center of the stage, and a new chapter of The Mayan Factor story began. Cerzosie was at the time also touring with NY-based rock band The Infinite Staircase.

The Mayan Factor has grown in stature, reputation, and accomplishment since the early days of the millennium. But even with a new singer, much remains the same: The Mayan Factor continue to create a bewitching, wholly immersive amalgam of Seventies-inspired prog, grunge, metal, and pure experimental music, and bravely address difficult subjects in their poetic lyrics. Today, we’re proud to share Mayan Factor old and new, and we’re confident you’ll see the artistic continuity between the mesmerizing “Warflower”, a song first recorded with Ray Ray in 2003, and the hard-hitting “Whispers”, a deeply personal new cut that’s dedicated to Lenny Cerzosie’s mother who passed away from ALS this past year. The song carries on the band’s progressive tradition

The two clips that accompany these songs pulse with the same intrigue and peril that radiates from The Mayan Factor’s music. In the disorienting video for “Warflower”, the camera zooms along an urban street at a speed too fast to be a simple viewer’s-eye depiction of a car trip, but too far low to be a plane or a drone. The background is intentionally muted – it’s impossible to read the street signs – and the sudden leaps between roadways and sharp turns on the roads create a sense of encroaching danger. This is a trip through an everywhere and a nowhere: a place of uncertainty, of transience, of potential collisions with the exigencies of the day.

The “Whispers” video explores what happens when one’s soul passes through this life and on to the other side – along with the ones that are left behind.  There is a procession of still and near-still images of a young woman going about the business of the day.  Sometimes she’s engulfed by light, and sometimes she appears to fade into the background, or the uncharted territory between frames.  A mysterious force awaits her in a field outside her house – and once she finds it, she quite literally comes undone to fuse with the universe. It in some ways represents the struggles with ALS while flipping through memories and recognizing loved ones lost. It’s difficult not to be moved by this engrossing clip.

Here at HIP Video Promo we feel profoundly honored and privileged to be a part of the rebirth of The Mayan Factor and find not just their resilience and dedication inspiring, but we’re also huge fans of their sonic mastery! It’s our sincere hope that you will embrace the band like we have and include these two videos in your cherished programming. Please contact Andy Gesner and the HIP Video Promo team at (732)-613-1779, email us at info@HIPVideoPromo.com or visit www.Facebook.com/TheMayanFactor for more info on The Mayan Factor.