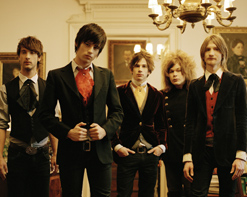 Greetings fellow music video fanatics! It’s Andy Gesner and the staff from Hip Video Promo, here to share a video by a new group of genuine historic significance. They’re named after the world’s most famous synthesizer, but they’re indisputably a guitar-based band. The country of origin stamped on their passports is located in Central Europe, but they’ve developed a sound that wouldn’t be out of place in the nightclubs of Goteborg, London, or the Lower East Side. They tackle dark subjects in their songs – the lead track on Sold For Tomorrow is positively vampiric – but their videogenic faces are sweet. They’re The Moog, and they’re Budapest’s answer to The Strokes, The Hives, and other internationally successful garage-pop luminaries. The first Hungarian band to make a splash in the United States (their show at this year’s SXSW was the talk of the event) stand as further proof of the cosmopolitan nature of alternative music and the power of the Internet: if your songs are good enough, recognition will accrue to your project no matter where you’re from.

Which isn’t to imply that Budapest is culturally remote. On the contrary, the Hungarian capital has become a center for underground style, and has long been regarded as an arts incubator. The Moog may be pioneers, but it’s certain that we’ll be hearing from Central Europe again and again. As ambassadors from the Budapest scene, you couldn’t ask for better than these five: their music is exuberant, undeniably catchy, well-crafted, and enthusiastically performed. As a product of Hungary’s first MTV generation, Sold For Tomorrow, the band’s international debut, betrays the band’s love for British pop and American gutter-rock: “Your Sweet Neck” pouts, caterwauls and sneers like Mooney Suzuki, while “Everybody Wants” carries with it some of the urgency and bright tunefulness of Modern Life-era Blur. Frontman Tonyo sings it all with a cool reserve, rarely shouting, skipping from note to note with the blithe spirit of a young man with places to go. “I Like You”, the single, is a statement of romantic bewilderment, and an acknowledgement that he’s not the right man for the object of his affections – but he likes her anyway, that’s good enough for him, and the clear implication is that it’ll be good enough for her, too.

Video director David Vigh was trained in London, but he’s a Hungarian, too, and he’s made Budapest the base for his production company. Art Mafia has shot clips for many of Hungary’s hottest acts, and has also worked with internationally-recognized artists such as Marc Almond. His clip for “I Like You” lavishes plenty of screen-time on the five members of The Moog, and they know exactly what to do with it, too: as they perform, they pose and gesture toward the camera with the easy assurance of true rock stars. The band looks terrific in 19th Century dress: long brass-buttoned jackets, stylish vests, wide collars on brightly-colored shirts. Tonyo sings into a microphone that looks as though it was borrowed from a museum of radio broadcasting – it’s tall, with a circular frame, and a square center. At times, it’s possible to see a portrait on the wall through the space between the circle and the square, and notice how the microphone echoes the dimensions and proportions of the old painting.

As the band plays, a young witch in a darkened chamber crafts voodoo dolls of each member. Satisfied with her work, she turns to the business of torturing the musicians: she electrifies one guitarist, tangles the other up in cords, sets the bassist’s feet on fire and sets the drummer’s back itching by pouring insects on his doll. She saves her most malicious act for Tonyo, though: as he reaches the bridge of “I Like You”, she drives long pins into his chest and stomach. Doubled-over, barely standing, he fights his way to the microphone to deliver his message.

Many thanks are due to Art Bourasseau and the crew at MuSick Records for making this all possible through their hard work! We’ll have plenty of copies of The Moog’s latest, Sold For Tomorrow, for all of your programming needs and for on-air giveaways. If you need more info, call Andy Gesner at 732-613-1779 or e-mail us at info@HIPVideoPromo.com. You can also visitwww.MuSickRecords.com, or www.myspace.com/moogband to find out more about The Moog.