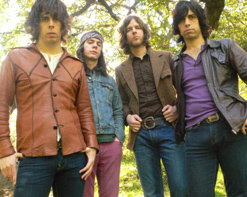 A big shout out to all of my pals in music video land! It’s Andy Gesner and the staff from HIP Video Promo bringing you a visually stunning new video from a band that is definitively New York…Mooney Suzuki. With Electric Sweat, the Mooneys produced a masterpiece of riff-rock minimalism, and on Alive & Amplified, they proved that they could construct a wall of sound sturdy enough to support their forceful melodies and guitar heroism. Their live shows are the stuff of legend: celebrations of rock and roll abandon, vigorous, dramatic, cathartic, filled with unabashed showmanship. The band once (and still) synonymous with the NYC underground has forged a sound and a style big enough to rock the American heartland.

Stuck for a long season in label limbo, Mooney Suzuki has found a new home at Elixia Records – and they’re bursting back into the rock mainstream with the thrilling, soulful Have Mercy, in stores June 19th. This time out, the four-piece stomps through a collection of inspired blues-rock, echoing classics from the Stones to J. Geils. “99%”, the lead single, begins with an insistent riff, thunders through two rafter-shaking choruses, and then climaxes in a call-and-response release. Sammy James, Jr. has never sounded in better voice: the blues suits his rough-and-tumble shout, and a decade’s worth of late nights and encore sets has deepened and toughened his road-tested pipes. There’s guitar galore, too – two electrifying solos, including a slide lead that just might induce vertigo in listeners.

The Strokes may have their legion of imitators, and the Yeah Yeah Yeahs their glowing reviews, but Gothamites know what time it is: Mooney Suzuki is the band that epitomizes the rebirth of NYC rock and roll in the ‘00s. Sammy James, Jr.’s ridiculously energetic quartet has always anticipated city trends – when the entire island of Manhattan went Mod at the turn of the decade, Mooney Suzuki had already been there. Remember the celebrated garage-rock revival? It was Mooney Suzuki who were driving that movement, too; kicking the asses of the NYC bands they shared bills with, and showing the would-be punks how to kick out the jams.

This spring, Mooney Suzuki is (where else?) back on the road, taking their act to Europe before swinging through American concert halls. But although they’ve won fans all over the world, their hearts belong to New York City. The exuberant clip for “99%” opens on a Brooklyn rooftop: the Williamsburg Bridge stretches in the background, as the band plays to the towers and smokestacks behind them. Sammy James claps, whirls, shouts, and gesticulates with such force that it often looks like he’s about to rupture the celluloid. New six-string ace Chris Isom is a video star, too: with his pointed boots, orange guitar, and shaggy hair, he’s a study in big-city cool.

But this isn’t a naturalist clip. The performance footage keeps dissolving into large, pixilated colored squares – like what you might see on an old video monitor. But when the camera pans in on those squares, instead of losing viewers in a wash of color, we’re treated to a study of Mooney Suzuki on the cellular level. Each of those pixels contains an image of one of the bandmembers, singing and performing “99%”; and as the musicians come into closer focus, we learn that they, too, are composed, pointillist-style, of the faces of James and his mates. Deeper and deeper we travel into the honeycomb – until the camera reverses, and we’re pulling outward, and pixels are gathering together to form James’s face, and the face of the kick-drum, and the walls of the city.

We owe a huge “thank you” to Keith Cutler and all of the folks at Elixia Records for all of their hard work in helping to make all of this happen! We would love to set you up with the opportunity to catch up with the band for a video interview when they come to your market, so drop us a line and we’ll make it happen! We are also prepared to hook you up with copies of Have Mercy for all of your on-air giveaway needs. If you need more info, call Andy Gesner at 732-613-1779 or e-mail us at info@HIPVideoPromo.com. You can also visit www.ElixiaRecords.com or www.TheMooneySuzuki.com to find out more about Mooney Suzuki.