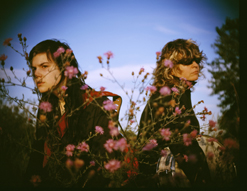 Happy New Years music fans! It’s Andy Gesner from HIP Video Promo, hoping you had a happy and restful holiday. But the calendar has turned, and it’s time to rock into 2009 – and to kick off the new year, we’re going back to the basics with The Pack A.D. The Vancouver duo plays stripped-down, frighteningly raw blues-rock – bracing, formidably-intelligent, and attention-grabbing. Drummer Maya Miller and guitarist Becky Black draw their inspiration from classic 20th century blues shouters (Son House, Robert Johnson, Muddy Waters), and the Sixties garage heroes who reintroduced those legendary blues 78s to a rock audience. If that description makes The Pack A.D. seem a bit like The Black Keys or early White Stripes, what can we say, there’s bound to be some overlap in their collections of vintage records. Good taste is perennial, and they’ve all got it.

Even those who loved Tintype, The Pack A.D. debut, were unprepared for the intensity and emotional honesty of Funeral Mixtape. The latest from the duo is also the fullest realization of their sound: an eleven-song set of brutal riffs, punishing beats, throat-grabbing songwriting, broken bones, war, werewolves, and worry. It also boasts a few utterly convincing blues ballads – soft numbers that are every bit as gripping in their pained intimacy as the distorted rockers are in their thunderous rage. Becky Black’s on-microphone fury has earned her comparisons to Janis Joplin, and those are warranted, but shouting isn’t all she does. She can go from a wail to a whisper, and back again; her voice is a remarkably expressive storytelling instrument, and on Funeral Mixtape, she stretches it to the full extent of its range.

In its rudimentary glory, lead single “Making Gestures” is quintessential Pack A.D.; it’s also the catchiest song they’ve ever written. Over an elephantine guitar riff and an insistent snare, it tells an ominous tale of destabilization, missed chances, and primal fear. The Pack’s imagery is, as usual, hallucinatory, immediate, and maybe even a bit unhinged: she sings of kids in the parking lot and animals in her head. “There are objects falling from the sky”, she tells us, from deep in her trance, “and it’s not snow”.

Toronto video director Sammy Rawal (Fritz Helder & The Phantoms, The Trews) is probably best known for his surreal fashion photography: he can make a typical model shoot look as weird as a Dali. But Rawal doesn’t doctor the images of The Pack A.D. in performance – instead, he just lets them play, and allows the duo’s intensity to generate its own mind-warping effects. Instead, Rawal saves his psychedelic tricks for the school playground. Here, all the kids wear impassive animal masks – it’s impossible to know if they’re looking at each other, or at the camera, or whether their eyes are even open. Even at the dance in the gymnasium, they stand weirdly still: they hold hands, but the masks prevent them from kissing. They’re disconnected, guarded, afraid of each other. Silently and tentatively they walk the school corridors, animated by the music, but drifting as if in a dream.

It’s our tremendous pleasure to have the opportunity to bring in the new year with our good friends at Mint Records! If you need more info, call Andy Gesner at 732-613-1779 or e-mail us at info@HIPVideoPromo.com. You can also visit www.MintRecs.com to find out more about The Pack A.D.