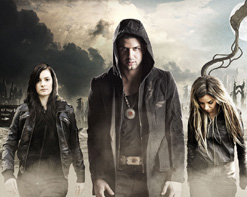 You don’t need to go to the movies to experience massive blazing special effects that would make Michael Bay jealous, you don’t need to go to The Metropolitan Museum of Art to hear the instruments dating back thousands of years, and you don’t need to visit Brooklyn to hear the most unique collaborations – These things can all be found in the video from The Particles titled “Taken Away.” It’s Andy Gesner and the HIP crew with one of the most ambitious music videos you will see this summer for your programming pleasure!

The Particles is the ultimate power trio, consisting of two female and one male vocalists trading lyrics in the midst of a fiery hard rock tune (think Evanescence, but with three singers). However, be sure to throw your hard rock limitations out the window. “Taken Away” meshes the classic tightly knit guitar bass and drums combo with Eastern instruments like Sitar, Daf, and the Ney. The Ney has existed for around 5000 years and has been employed by early and original rockers like the Egyptians! “Taken Away” is also unusual lyrically, as each singer becomes a character in the song, drawing inspiration from mythological characters and storytelling.

This debut video is the result of many months spent in rigorous and dedicated hard work, and it shows. “Taken Away” is a visual masterpiece in every literal sense of the word, comparable graphically to high budget Hollywood action flicks. The video takes place on the verge of an apocalypse, as the world collapses into hell, burning up in a fiery storm of destruction. The Particles each embody different characters that are tied to the devastation around them, working along with the lyrical story of the track. The sheer graphical wonder of the collapsing world will astound you, we promise. As each character battles his or her demons, entire cities fall into ashes. If there was a hell according to Dante, this would be it.

A word of caution: this is a music video of epic and monstrous proportions; any clip that might follow it will end up looking bland and boring! We would love to hook you up with some goodies from The Particles, so please be in touch and let us know of any giveaways and contests you’d like to run. If you need more info, call Andy Gesner at 732-613-1779 or e-mail us atinfo@HIPVideoPromo.com .