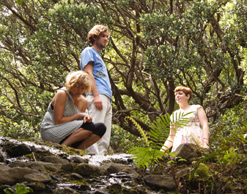 Howdy fellow indie rock and rollers! It’s Andy Gesner and the staff from HIP Video Promo, bringing you a must see clip from across the globe. One of the most refreshing trends in the musical underground has been the recent turn toward a genuinely international sound. The critical and commercial success of bands like Vampire Weekend, TV on the Radio, and Yeasayer strongly suggests that indie audiences are cultivating a healthy interest in world music. It’s worth pointing out that there’s nothing dry or clinical about these groups; on the contrary, their globetrotting expeditions are joyful, experimental, and invariably tuneful. With the fascinating Sea Lion by The Ruby Suns, we believe the movement may have reached its apotheosis.

The New Zealand combo’s sophomore effort is a magnificent fusion of indie and twee, folk-rock and dream-pop, Polynesian rhythms and James Mercer-style melodies, African percussion and Beach Boys harmonies, musique concrete, and all-purpose Down Under strangeness and charm. Imagine of Montreal after a whirlwind tour of the Pacific and you’re halfway there; the other half is purely the invention of the singular Ryan McPhun. A recent Australian tour with The Shins introduced The Ruby Suns to an international audience, and their poly-ethnic sound has won them notoriety and respect from Stateside critics. Praising the band’s skillful psych-pop in a 8.3-ratedPitchfork write-up, Andrew Gaerig compares The Ruby Suns to Panda Bear and Olivia Tremor Control, and boasts that “the album’s building blocks ooze with a homespun grace”. “Sea Lion”, raves Andrew Leahey in a four-and-a-half star All-Music Guide review in which he calls the album a perfect middle ground between indiepop and world music, “is an aural melting pot, with ukuleles and sun-baked singalongs sharing space alongside ’80s-styled electronica and programmed percussion.”

Leahey and Gehrig (and other reviewers, too) have singled out the astonishing “Tane Mahuta” for praise. Sung entirely in Maori, it’s a pure, earnest folk-pop shouter – at once foreign and familiar, bizarre and weirdly comforting. As always, McPhun has crafted an imaginative rhythm track and a winning melody, and he and his bandmates perform the piece with stunning sincerity. For Americans who couldn’t possibly catch the reference, the Tane Mahuta is a giant and ancient tree growing in the wilds of northern New Zealand – the so-called “Lord Of The Forest”. Mystical powers have been attributed to this magnificent landmark; steeped in awe and wonder, The Ruby Suns’ track radiates reverence, respect, and glee

The clever clip for “Tane Mahuta” takes us into the forests at the eNZ of the earth – and does so via black and white photographs reprinted in a Weekly World News-style tabloid! The video is a parody of yellow journalism – but it takes its own sensationalism seriously, bringing the wild headlines to life. “Baby Found In Forest With Treasure-Map Tattooed To Its Back”, the newspaper promises; minutes later, we watch as the infant is abducted by a bear and taken into verdant seclusion. The surface of the newspaper is alive with activity – images jump from one frame to the next, headlines swim and shake, text dissolves into action and back. In one fantastic sequence, we’re taken from an aerial view of New Zealand to the depths of the forest, plummeting from a satellite’s-eye view to the canopy of leaves within seconds.

Lacey Swain, Megan Jasper and the Sub Pop crew have done it once again, and as always, have set us up with plenty of copies of Sea Lion for all of your on-air giveaway needs. We would love to help you do whatever you need to make this video a big success, so please be in touch! If you need more info, call Andy Gesner at 732-613-1779 or e-mail us atinfo@HIPVideoPromo.com . You can also visit www.SubPop.com to find out more about The Ruby Suns.