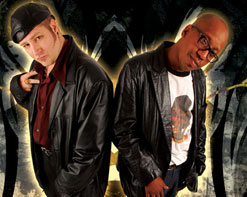 Hello programming brothers and sisters, it’s Andy Gesner and the HIP Video Promo staff with a clip that is going to boggle your brain connections almost instantly! What do you get when you team an M.C. who sites his biggest influences as Jimi Hendrix, and Run DMC with a DJ/vocalist who idolizes David Bowie, and Peter Gabriel? You get the totally zany and genre-defying track “No Surprise,” brought to you courtesy of The Rush Project, a duo that refuses to settle for any specific sound, instead choosing to conquer them all.

The Rush Project is a combination and labor of love of Rush Rydah, also known as veteran performer Darcel Perkins, who got his start backing up acts such as P.O.S., Attitude Adjuster, and The Elite, and Communion, also known as Dmitri Antos, who launched his music career as guitarist/singer-songwriter for electro-industrial group Pale. Perkins learned his trade from his mentor Sir Mix-A-Lot, while touring with him across the nation. Antos, on the other hand, is a classically trained vocalist and composer.

“No Surprise” is the latest single off The Rush Project’s album titledTherapy. The record features an array of various genre fusions, including heavy slap hip-hop, techno, acid jazz, and the 60’s beach party inspired current single. Some of the tracks on the record were co-produced by The Presidents of the United States of America front man Chris Ballew. The record also features guest appearances from Outtasite, Jane C of Farchild, Ced da Savage, Delesha Lewis, and Spunk.

The track is a combination of outlandish lyrics and a mix of rock, jazz, and dance all in a matter of several minutes, making this song impossible to truly compare to any artist, new or classic! Yes, The Rush Project are truly onto something fresh and yet unclassified. The group describes the track as a 60s beach party, yet the track features many jazz elements as well. The clip plays a perfect wingman to the party, featuring psychedelic backgrounds that move to the music. There are also several attractive female dancers joining the fray. Just when you thought this video couldn’t get more over-the-top, The Rush Project drops in a saxophone playing robot into the mix! It’s a sight to be seen.

Join us in exposing this unique and original dup. We’ve got lots of The Rush Project stuff here at the office and would love to share it with you and your viewers, so let us know and we’ll get it to you right away. You can also visit www.TheRushProject.net to find out more about The Rush Project.