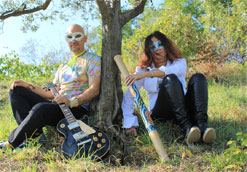 The Silver Snails are a band with a goal (to create the world’s finest pop rock) and a mission (to open human hearts through sound, light, and word) as lofty as they come. Their uncompromising, hands-on approach to quality and craftsmanship resonates across their media and branding. An Italo-US joint venture between lead singer Lucas Ward and his wife Elisa Fantini, The Silver Snails take inspiration from the family’s rustic backdrop in the wine country of Romagna, Italy, yet fashion a contemporary, artisanal pop-rock for a global audience, like a fine silk tie from a Florentine fashion house.

Songs on The Seven Melodies, the group’s ambitious, harmonically rich debut album, are sung in English, French, Italian, Mandarin, and even a bit of Sanskrit. The style of the group is playful and theatrical, strongly reflecting early imprinting of Beatles, Stones, Bowie, Floyd and other invasive British species. Yet despite their galactic ambitions, The Silver Snails are an act distinguished aby intimacy. Based around an actual nuclear family, the music they make together is warm and welcoming; the themes may be cosmic, but the sound is approachable and friendly, full of analog ‘real instruments’, lush vocals, well-crafted beats and textures, and infectious melodies.

Track #4 of The Seven Melodies, “Ave Maria a Zio Virgilio”, was written by Lucas as a requiem for Elisa’s Uncle Virgilio, a devout follower of Mary. The song features real strings over tango-electronica, an ‘angelic chorus’ echoing Elisa’s soaring soprano vox, Lucas rapping verses from The Bhagavad Gita, and a ‘dueling’ double-accordion solo in the middle.

Like the other official videos from The Seven Melodies, “Ave Maria A Zio Virgilio” was entirely written and produced by The Silver Snails on location in Romagna, Italy, and is dedicated to “The Human Family.” The video required years of preparation, including several years of private tango instruction for Lucas and Elisa to learn the 120-step joint-choreography created by Andrea Zanchini for the video. A complete departure from the ‘space pop’ milieu of ‘Dancing with the Stars’, the world of “Ave Maria a Zio Virgilio” features an exotic banquet of tango dancing, peacocks, flowers, accordions, and Bollywood-inspired group choreography with Lucas dressed as the Hindu deity Krishna. In addition to the main video, “Ave Maria a Zio Virgilio” comes with a companion “Making Of” video which brings fans into their video production process over three days of shooting and explains the symbolism.

Here at HIP Video Promo, we’re over the moon to team up with The Silver Snails once again to share “Ave Maria a Zio Virgilio” with the world! We hope you embrace this “crown jewel” clip as much as we have and consider including it in your programming and online presentations in a timely fashion. Rest assured we’ll have plenty of The Silver Snails merch available for on-air contests and giveaways, so don’t hesitate to get in touch if you’d like to get your hands on some. For more information on The Silver Snails, please contact Andy Gesner and the HIP Video Promo team at (732)-613-1779 or email us at info@HIPVideoPromo.com. Visit thesilversnails.com for more info, or head to facebook.com/TheSilverSnails or twitter.com/TheSilverSnails