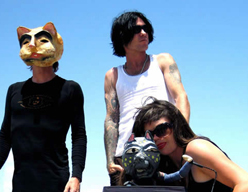 Greetings and salutations to everyone in music video land! It’s Andy Gesner and the staff from HIP Video Promo, back with another suggestive video from an unclassifiable independent band. One of the things we admire about Sidecho Records is their willingness to take chances on the truly unusual: as fascinating and accomplished as The Spores are, there aren’t many labels, indie or otherwise, who would have had the cojones to release Imagine The Future. Consider that when polymath Molly McGuire conceived of the project, she’d been inspired by Gorillaz – but instead of a group made of cartoon characters, her theoretical combo consisted of puppets. The preposterously talented McGuire even designed the puppets and gave them suggestive names like Miss Fishnets, Tito Zzorro, and Da Buul, and if you check your copy of Imagine The Future, you’ll see they’re credited in the liner notes, right alongside the “humans”. The puppet images dominate the Dali-esque landscape depicted in the CD insert; this, too, was designed by McGuire. She’s an auteur with a rich, complete, and detailed vision, and Imagine The Future is our first protracted glimpse into her art-damaged world.

McGuire is also an imaginative bassist and a bewitching singer; in the recorded iteration of The Spores, she’s joined by Greg Biribauer on guitar and synthesizer and Kenny Pierce on drums. These flesh-and-blood collaborators haven’t displaced the puppets, though, and those who are lucky enough to have caught The Spores live have seen McGuire’s papier mache creations in performance action. Spores gigs are surreal experiences – mind-altering, theatrical, tuneful examinations of the relationship between artists and their fabrications.

With a backstory like that, you’d expect Imagine The Future to be bizarre, dreamlike, and visionary – and you’d be correct. At times, the cuts roar with alt-rock fierceness, while other tracks incorporate elements of indiepop, darkwave, and IDM. You can dance to The Spores, but just don’t get too comfortable: the grooves that the band settle into might metamorphose at any moment into something twisted.

“(Don’t) Kill Yourself”, the lead single, begins like an ethereal (but restless) 4AD track before stopping on a dime and crashing into a harder-rocking chorus. Once the fury ebbs away, cool synth strings recapitulate the melody. McGuire’s nightmare advice to the listener sounds harsher than it really is: upon closer inspection, the song turns out to be a satire on the megalomania and obsessiveness of celebrity culture.

The trippy clip for “(Don’t) Kill Yourself” opens with shots of McGuire’s pen: she’s drafting one of her characters, laying penstrokes on the page, and drawing to the backbeat. She purrs to the camera as she brings her character to life – and by the time we reach the first chorus, the video has become an animated phantasmagoria. McGuire’s creations stalk a desert setting and blast off into outer space; there’s a sense of destabilization and impermanence throughout, and the world seems to be shaped by whim. After the second chorus, the puppetheads emerge: the bandmembers, each wearing a character mask, drift wraithlike through a dry landscape. Elsewhere, the fetching McGuire sings straight to the lens as the camera swirls around her; gauzy-filtered and effected, the image blurs in step with the hypnotic production.

Here at HIP, know we can always count on James Cho at Sidecho Records to bring us such cutting edge artists like The Spores. We’ve got plenty of copies of Imagine The Future on hand for on-air giveaways and the band will be on tour throughout October, so let us know if you would like to get your hands on the CD or if you are interested in setting up video interviews with this eclectic trio. If you need more info call Andy Gesner at 732-613-1779, or email info@HIPVideoPromo.com. You can also visit www.TheSpores.com to find out more about The Spores.