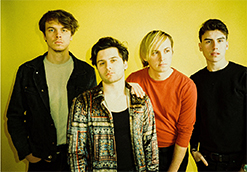 It’s quite easy for members of today’s generation to get wrapped up in the social vortex that surrounds them. It seems that everyone is concerned with their social metrics; rather than a personal connection, relevancy and popularity are what they’re after. Who isn’t tired of their own generation and this way of life? New Jersey pop-rock outlet The Stolen certainly is, and that’s what they address in their latest single “Millennial.”

Over the past few years, The Stolen has been recognized and heralded by notable tastemakers such as MTV, Billboard, and Alternative Press. They’ve shared the stage with artists such as Neon Trees, The All American Rejects, and Jake Miller, among others, and have played Vans Warped Tour. The band’s single “Overboard,” released earlier this year, hit No. 21 on the iTunes Alternative Chart, and that, along with recent singles “Change The Record,” “Stuck,” and “Rooftop” perfectly illustrate where the band’s sound is headed. The Stolen will be releasing their first full length self-titled record May 31, and will be hitting the road this summer in support of the release.

The visual for “Millennial” follows our protagonist going throughout his day as a typical member of this generation: putting in Air Pods, juuling, ordering sushi (without moving from his couch of course), and using his favorite modern dance moves to rock out to The Stolen. The band says about the “Millennial” visual, “The video is sort of a mockery on how we (millennials) are. It’s a weird cross between being tired and feeling old with your own generation, but realizing you’re exactly the same and a part of what you are so tired of.” Eventually he throws on his virtual reality goggles and is transported to a new universe where he is rocking with the band, taking pictures, experiencing everything through screens instead of living in the moment – something that members of the younger generation are all too familiar with.

We are thrilled to be working with The Stolen and promoting their video for “Millennial”. Please let us know what we can do to get this clip included in your regular programming and online presentations, and if you’d like us to send merch for on-air contests and online giveaways. Contact Andy Gesner and the HIP Video Promo team at (732)-613-1779 or email us at info@HIPVideoPromo.com. You can also visit instagram.com/thestolen, twitter.com/thestolen, or www.thestolenmusic.com for more info.