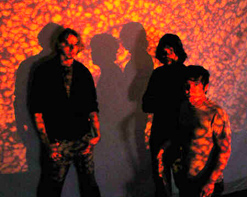 Hello friends, it’s Andy Gesner and the ever-growing staff here at HIP Video Promo, and a collective high five is in order on this fine summer day, as we are here to share a brand new clip compliments of our longstanding friends at Rainbow Quartz! Despite its unpretentious, blue-collar reputation, Philadelphia has been home to one of the most persistent and fruitful psychedelic-rock revival scenes in the past two decades. Philly psych isn’t airy or whimsical; instead, it takes its cues from hard rocking day trippers like Roky Erickson, The Seeds, and Todd Rundgren’s Nazz. Wildly popular (and influential) along the banks of the Delaware, head music from the City of Brotherly Love hasn’t yet penetrated the larger American musical consciousness. Until now: longtime Psychedelphia champions The Three 4 Tens have created an album so irresistible that it’s guaranteed to win fans wherever it’s played. The Philly quartet has already had a taste of the big time – they’ve opened for The Who, and streaked through North America with The Brian Jonestown Massacre and Rocket From The Crypt. Lauded at home and increasingly celebrated on the road (gigs in support of the cheekily-titled Taking Northern Liberties took the band to England and Spain), The Three 4 Tens are poised to bring their mind-bending pop to a mass audience.

Down The Way, their third full-length, is a quietly breathtaking disc: an amalgam of Nuggets-style garage rockers, space and drone-pop a la Saucerful Of Secrets, and raucous new wave. Guitarist Joe Tagg and bassist Jamie Mahon somehow manage to write tight, catchy songs that also serve as platforms for wigged-out improvisation and instrumental wizardry. Years of fine-tuning the live show in clubs up and down the Eastern Seaboard has turned the band into champions of the psychedelic rave-up, and on Down The Way, they don’t disappoint: “R.U.B.A.” and “A Clean X” are scalding-hot torrents of guitar, drums, and vocal harmonies, all processed to give you that giddy feeling of dislocation that the best psychedelic records invariably generate. But the softer songs are, if anything, even stranger and more seductive. “Every Day”, the first cut and lead single, is a musical riddle that draws the listener into the odd, dreamlike logic of The Three 4 Tens.

To bring this reverie to life, the trio has turned to another Pennsylvanian with a taste for the trippy: the well-regarded underground artist, sculptor, and filmmaker Marc Brodzik. Best known for his bizarre reinterpretive paintings of Fifties and Sixties advertisements, he’s got quite an eye for the intrinsic weirdness of American culture. But he’s also shot straightforward documentary films with a polemical edge – his Hard Coal was a study of independent anthracite miners in northern Pennsylvania – and his explorations of U.S. history have always been novel and provocative. For the strange and mysterious “Every Day” clip, Brodzik has intentionally narrowed his camera range and tinted his footage so that the video looks like a WWII film-strip. (He even shakes the camera a bit – and appends some test-shots to the beginning and end of the clip – just to give the video that vintage news-reel feel.) The clip follows an old man – possibly a war veteran – slowly assembling some kind of bomb from blueprints and schematics. He does so within the confines of a seedy room decorated with 1930s Japanese rising-sun posters and recruitment placards. Images of weapon-smelting are superimposed over others of a deserted city street, or of the old man moving to the music (or some other, inner music), or of Japanese characters. By the end of the clip, he’s waltzing with his bomb, and he climbs into bed with it, just as a rising sun logo emerges from behind high mountain peaks.

We’re incredibly happy to be working yet again with Jim McGarry and Bill Pascuzzo of Rainbow Quartz. They’ve completely hooked us up with plenty of copies of Down The Way for all of your on-air giveaways and programming needs, so if you’d like a copy of the killer album, don’t be afraid to hit us up! If you need more info, call Andy Gesner at 732-613-1779 or e-mail us at info@HIPVideoPromo.com.