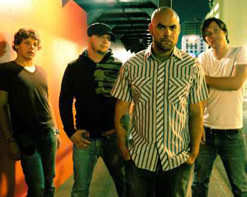 Greetings and seasonal salutations! It’s Andy Gesner and the staff from HIP Video Promo, here to help spread the word about another terrific new indie band that’s just beginning to gain notoriety. They’re heroes in their hometown of San Diego, but not everybody in indie rock nation knows about The Transit War yet. With the release of their sophomore album, Miss Your Face, that’s about to change. Produced by Joe Marlett (Relient K, Blink-182 and Queens of The Stone Age, etc), the album features eleven infectious and energetically-played modern rock songs. Those who heard Ah Discordia!, the Transit War’s independently-released ’05 debut, re-released by Orange Peal in Jan’06, will be stunned by how much the band has grown in a year; everybody else will simply be singing along.

Reviews for the full-length have been uniformly enthusiastic. The All Music Guide crowed about the group’s improved songwriting and crisp sound, and called Miss Your Face “clever and compelling”. Upon the release of the album, The Transit War was named Spin’s Artist Of The Day, and the magazine raved about the lead cut in its “Hey, This Is Awesome” section. Meanwhile, Smother.net put it as succinctly as they could: “simply stated, if you don’t own this album, you’re missing out on one of indie rock’s best adventures this year.”

The quartet has honed their ferocious stage set with relentless touring – they just finished a successful run with Lost Prophets and currently they’re sharing stages with Zolof The Rock And Roll Destroyer, Roses Are Red, and Rory and they show no signs of taking an end-of-year break from their gigging schedule. As a result, The Transit War have become almost absurdly tight, bouncing rhythms and riffs off of each other with the kind of confidence usually seen in bands that have been together for ages. Marlett takes advantage of that commitment to teamwork on Miss Your Face, shining a spotlight on the band’s fierce rhythm section. On “Radar”, as the two guitarists trade chords, bassist Mike Frey and drummer Brad Bohensky lock into a ferocious groove. Bohensky punctuates Frey’s sung confession by hammering on his snare; it sounds insistent, authoritative, like he’s calling the meeting to order.

For a relatively new band, The Transit War have amassed a pretty distinguished videography. Ron Najor’s provocative and sexy clip for “We’re Sleeping Better Now” proved to be compulsively watchable, and received airtime on Much Music The video for “Kerosene” – the standout cut and single from Ah Discordia! – did even better for the band, winning a public poll to appear on MTVU’s The Freshman, as a result sending the video into regular rotation on MTVU. Upon “Kerosene’s” premier on Yahoo Music it received over 45,000 unique viewings within the first week, on par with bands such as Hawthorne Heights and other major acts. While both of the Discordia clips incorporated narrative elements, the videos focused on the Transit War in performance. Veteran director Darren Doane (Deftones, 311, Promise Ring, Gwar, countless others) was also excited by the band’s live energy. His clip for “Radar” is an abstract, classic-looking performance clip that moves from black-and-white shadows to a full-color live-action playing. The camera dives into the silhouettes; each shifts and transforms into an image of a different bandmember. The camera cuts rapidly between the players, and the focus blurs from time to time until it’s hard to tell who you’re looking at. The indeterminacy is the point: The Transit War operates as a well-calibrated unit, and if you’re watching one of them, you’re watching them all.

We’re very excited to welcome Glen Schwartz and the entire Orange Peal team to the HIP Family and we couldn’t be happier to help them get the word out about The Transit War. The band is constantly touring, so let us know if you’d like to set up video interviews when they come through your market. If they aren’t coming through, you know you can count on us to have plenty of copies of Miss Your Face on hand for all of your on-air giveaway needs. If you need more info, call Andy Gesner at 732-613-1779 or e-mail us at info@HIPVideoPromo.com. You can also visit www.OrangePeal.com to find out more about The Transit War.