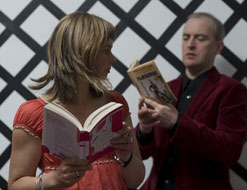 Greetings, everybody, it’s Andy Gesner from HIP Video Promo, here to spread the word about a brand new clip from a small Scottish band with a gigantic legend. Even casual music fans know that The Vaselines were Kurt Cobain’s favorite group. The Nirvana guitarist called Frances McKee and Eugene Kelly the best songwriters in the world, and even named his daughter after the Vaselines singer. In their short career, Nirvana managed to record three Vaselines songs: “Jesus Doesn’t Want Me For A Sunbeam,” “Son of a Gun,” and “Molly’s Lips.” When Nirvana took the stage at the Reading Festival in ’91, Kelly was right there by Kurt Cobain’s side.

What isn’t always reported is that the Glasgow-based band exerted an enormous influence on two decades of U.K. independent pop. Belle & Sebastian founder Stuart Murdoch borrowed more than a bit from the Vaselines’s buoyant melodies and candid lyrics about sex, religion, and awkward human relationships. Murdoch and his bandmates made no secret of their admiration for their fellow Glaswegians, and when the Vaselines reformed in 2008 after a long hiatus, Belle & Sebastian guitarist Stevie Jackson and bassist Bobby Kildea added their prodigious talents to the band. This December, the Vaselines will join B&S at their second massive Bowlie Weekender festival.

What’s most remarkable about the Vaselines story is that they managed to make an outsized impact on both sides of the Atlantic despite recording very little: two brief EPs and a single poorly-distributed ten song full-length. But nearly everybody who heard these recordings fell in love with the band’s charming juxtaposition of innocence and lasciviousness. And then there were the tunes: brutally straightforward, maddeningly catchy, impossible to forget.

Now, twenty(!) years after the release of the Dum-Dum LP, The Vaselines are back with their second album. We’re pleased to report that they’ve picked up right where they left off — “Sex With An X,” the title track, is an instant Vaselines classic. The lyrics are playfully ambivalent: the tug-of-war between sexual indulgence and hard-won wisdom is still ongoing. Best of all, Kelly and McKee still sound as they did in the ’80s. They remain pleasant and conversational; they’re knowing guides in troubled psychic territory.

The clip for “Sex With An X” makes a gag out of the group’s protracted layoff with a bit of speculative history: what if McKee and Kelly had split up the band to serve God instead? By now, Eugene Kelly would be a well-read, dignified priest, and Francis McKee would be Mother Superior, wouldn’t she? But the desire to rock doesn’t die easily. The story picks up outside the cathedral, where McKee, in a nun’s habit and wraparound shades, beckons Kelly, looking smart in his vestment, to get into her black sportscar. From there, it’s a pure joyride, as these two mischief-makers speed along the verdant Scottish highways, terrorize children, steal pocket change from buskers (smashing their guitars in the process) and raise a little hell in a playground. The message is clear: Jesus still doesn’t want them for a sunbeam, but it hardly matters. The Vaselines are back, their formidable power intact, and music fans can once again rejoice.

Big thanks to Sub Pop for having us on board for this exciting project. The Vaselines are a personal favorite here at HIP and I hope you’ll share in our enthusiasm for the band by supporting this video! If you need more info, call Andy Gesner at 732-613-1779 or email us at info@HIPVideoPromo.com.