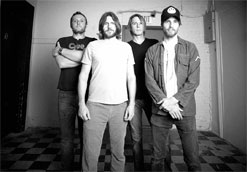 So what does it mean to be a Jersey boy? A Jersey boy carries himself with a certain insouciance; there’s a no-B.S. attitude and gruff swagger to everything he does. He’s not impressed with awards or accomplishments – he’ll judge you by the way you act, not by your reputation or your bankroll. And, to be frank, if you’re a Jersey boy, you’re probably more than a little annoyed by the way those other boys across the Hudson River behave. And let’s face it, they all come from somewhere else anyways. You might look askance at all the social climbing and the hyperbole common in Brooklyn and Manhattan. And should one of the New York boys manage to pinch your girl – lure her to the flashier side of the river – chances are, you’ll have something to say about that.

That’s the predicament that the narrator of “Jersey Boy”, the latest single from the Asbury Park rock band The Vice Rags, finds himself in – and true to type, he’s not going down without a fight. Don’t call his story a lament, because Jersey boys don’t whine. Instead, “Jersey Boy” puts his case to his old flame in rough, plain language: there’s nothing on the other side of those bridges and tunnels that he can’t provide better than the New Yorkers can.

The Vice Rags ought to know. They’re Jersey boys themselves – all four were members of popular, respected Jersey independent rock bands before joining their new outfit. Drummer Joe Chyb hit the skins for The Anderson Council, unparalleled channelers of the spirit of ’60s psychedelia and garage rock. Guitarist Jack Roberts brought the six-string fire to the rollicking punks Mars Needs Women. Bassist GE (known to Jersey rock fans as “Gay Elvis”) was part of the irreverent Kid With Man Head, and he played with Vice Rags frontman Paul Rosevear in the fuzzed-out power pop band Readymade Breakup. These were very different bands – but they were united in a certain Jersey attitude and resourcefulness. They were fiercely independent acts with deep respect for rock history, and they were determined to build audiences for themselves on their own terms.

The Vice Rags are the inheritors of that Jersey indie tradition, and they’ve been championed by the regional press: The Deli, The Aquarian, and Real Gone have all praised the band’s no-nonsense, back-to-basics, blue-collar rock approach. The clip for “Jersey Boy” is similarly unpretentious – just the group, a room in a practice space (with song titles scrawled in chalk on the wall for extra authenticity), electricity, and sweat. These four musicians are plainly having a blast, but it’s just as clear that they mean every pissed-off word they’re singing. They wouldn’t be Jersey boys if they didn’t.

As Garden State musical kindred spirits ourselves, we’re stoked to partner with our friends The Vice Rags to promote the clip for “Jersey Boy.” It is our hope that you embrace this clip as much as we have and we’d love to see this video added into your regular programming and online presentations in a timely fashion. Rest assured we’ll have plenty of The Vice Rags merch available for on-air contests and giveaways, so please don’t hesitate to get in touch if you’d like to get your hands on some. For more information on The Vice Rags please contact Andy Gesner and the HIP Video Promo team at (732)-613-1779 or email us at info@HIPVideoPromo.com. You can also check out www.facebook.com/thevicerags for more info on The Vice Rags!