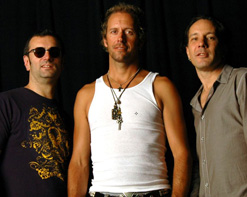 Howdy programmers! Andy Gesner and the HIP crew, here with a video from a group with restless spirit and a classic rock and roll heart. The Voodoo Jets bring back the coolness of the keytar in their tightly wound up pop rock number, “Cry.”

Inspired by such great power pop acts as Cheap Trick and the Beatles, The Voodoo Jets’ sound seeks to reclaim the innocence of an era gone by, though married seamlessly with a modern power pop ethic. Envision keyboards turbocharged by a wall of guitar amplifiers, the subtle layered harmonies of the Beach Boys, and a precise but relentless rhythm section. The Voodoo Jets deliver passion, beauty, and crushing hooks all in one surreal burst of pop rock energy that is their track “Cry.” The song features group leader Micah Sheveloff on the keytar as he modulates it through some serious fuzz. The track deals with the human blues, but does so in the most uplifting arena rock manner, never letting the subject of the song take away from the good feeling rock and roll was always meant to carry.

The video for “Cry” combines a straight forward no-holds-barred performance with story elements to keep viewers hooked and interested all the way through. The band is placed into a white setting, surrounded by video monitors, reminiscent of the ZooTV Rolling Stone interview with Bono, as his face was displayed around him on video screens as he puffed away on a cigarette. The performance is spliced in with shots of a girl crying endlessly with no end in sight, as the band plays on in hopes of one day seeing her misery coming to a turnaround. Oh, and did we mention there is a totally badass keytar solo!

The Voodoo Jets consists of veteran rock and rollers and skilled players, who have honed their chops through years of relentless touring and making records. Sheveloff is a onetime bandmate of Gary Cherone (Extreme, ex-Van Halen) in Boston. Drummer Greg Trabandt was originally in a group called Furious Styles, who toured with the Spin Doctors, Maceo Parker, and Blues Traveler while managed by Kamal of The Jerky Boys. They’ve aligned themselves with lead singer and bassist Francesco Perrouna to solidify a formidable power trio. The Voodoo Jet’s original drummer, John Fowler, who passed away in 2008, was widely recognized as the drummer of Steelheart fame. Steelheart was a successful 90s glam rock group that released several records, including a song acted out by Mark Wahlberg in the movie Rockstar. The band pays tribute to him in the “Cry” video as he appears on the snare drum head during one of the performance scenes.

All of us at HIP Video Promo hope that you’ll join us in showing this deserving and catchy group to the eager masses. We’ve got plenty of The Voodoo Jets stuff here at HIP HQ so be sure to reach out if you’d like an opportunity to interview or receive some swag for giveaways by calling Andy Gesner at 732-613-1779, or email info@HIPVideoPromo.com.