The Weeklings “In The Moment” 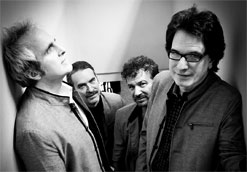 “In The Moment” is the new song and video from The Weeklings, and it’s yet another standout track in the world of Beatle-inspired power pop. Like many others, The Weeklings have immersed themselves in ‘60s magic, but the band twists the past with a unique ability to reconstruct the influences of the masters in a way that sounds exciting and fresh, as well as catchy and familiar. The ethos of The Weeklings is to carry on the legacy of tight song construction, which they execute with passionate performances of bright melodies and harmonies punctuated by shimmering guitars and adventurous bass and drums.

All four members of The Weeklings are musicians that have excelled among the foremost students of the power of The Beatles. Lefty Weekling (Glen Burtnik), Zeek Weekling (Bob Burger), Rocky Weekling (John Merjave), and Smokestack Weekling (Joe Bellia) came together as an offshoot of a series of Burtnik’s “Beatle Bash” shows, which walked through virtually all of The Beatles’ LP releases. With Burtnik and Burger having years under their belts as a Gold and Platinum awarded song writing duo, it was only natural that an original project would emerge. The Weeklings both pay tribute to the greatest power-pop group of all time and write and play original music that masterfully captures the soul and vibe of what is termed “Beatlesque”. Yes, The Weeklings are the rare band that can play Beatles compositions with astonishing fidelity to the source, and then segue into their own songs that match the intensity, inventiveness, and joy of the Fab Four. “In The Moment” accomplishes that goal: to be true to the sound and spirit of the British Invasion, but to also reflect this New Jersey-based band’s own quirky attitude.

The new song follows The Weeklings’ 2016 full-length release Studio 2, which was comprised of a set of delirious power-pop originals and four Lennon-McCartney rarities, and was embraced by music fans far beyond the borders of the Garden State. Like Studio 2, “In The Moment” was recorded in the UK at Abbey Road Studios on the original vintage 1960s gear – and judging by the guitar, drum, and vocal sounds the band captured, those machines haven’t lost any of their magic. This is a band composed of highly talented and experienced members (past credits include Burtnik as a former member of the classic rock band Styx that has also written #1 hits for Patty Smyth and Don Henley). But The Weeklings represent the drive of four obsessed musicians that continue making music at the highest level imaginable, while immersing themselves in the history of world-shattering rock and roll music. For listeners, it’s just pure pleasure.

With the video for “In The Moment”, The Weeklings are shooting for an irreverent playfulness. The clip combines the best features of lyric videos with words scattered into the frames, but adds plenty of performance clips, showing footage of the foursome in action. The video shows why close vocal harmony with “oohs” and “aahs” in the choruses are still indispensable and fun song elements! When The Weeklings tear into the song, they do so with the energy and joy you expect from Beatles devotees. Listen especially to Lefty’s balls-out, melodic Hofner bass track. The Weeklings overlook no details.

As longtime Beatles fans and lifelong Jersey residents, we’re thrilled to be working with The Weeklings to promote their outstanding clip for “In The Moment.” We’d be thrilled to see this video added into your cherished programming and online presentations in a timely fashion, so please don’t hesitate to check it out. Rest assured we’ll have plenty of spectacular merch available from The Weeklings for on-air contests and giveaways. so hit us up and we’ll be more than happy to send you some. For more information on The Weeklings please contact Andy Gesner and the HIP Video Promo team at (732)-613-1779 or email us at info@HIPVideoPromo.com. You can also visit www.weeklings.com for more info.