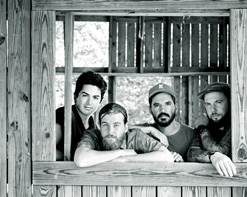 Singer and songwriter Patrick Keenan of The Winter Sounds understands the mind-altering potential of a trip to the deep woods. In the gorgeous, hallucinatory video for “Heartbeats”, the first single released from Maximum Reality, Keenan and filmmaker Zbanski Kino took the viewer on an unforgettable ride to the heart of the Estonian forests. That video drew favorable notice from the Huffington Post, Essentially Pop, Paste, AXS TV and other outlets, and firmly established The Winter Sounds as a group with a visual identity to match its imaginative music. Now, Keenan and Kino are back among the tall trees of Estonia for the follow-up clip for “Earth After A Thunderstorm” – but this time, they’re not alone. The singer is joined on his journey by a one-armed mannequin, who, over the course of this skillfully directed clip, just about comes to life.

That’s the sort of perceptual magic trick we’ve become accustomed to getting from The Winter Sounds, specialists in enchantment that they are. Maximum Reality, which is named for a concept in the philosophical writings of Immanuel Kant, is a heady, literary, tuneful, danceable, synth-draped exercise in modern pop-rock; the year is young, but it’s already one of 2018’s musical highlights. Produced by Derek Garten (Jewel) and Jason Kingsland (Band Of Horses, Deerhunter), the new set fully realizes the potential of the band’s prior three albums. The group has perfected its distinctive amalgam of folk, synthpop, dreampop, and classic rock, and Maximum Reality demonstrates both their versatility and their ability to draw unexpected connections between disparate sounds. “Earth After A Thunderstorm”, for instance, is more meditative than the propulsive “Heartbeats”, but both songs are cinematic, thoughtful, and wholly engrossing.

Keenan is the star of the “Earth After A Thunderstorm” clip – but just barely.  The cinematography is once again stunning, but it’s the mannequin, inert though it (or she) is, who nearly steals the video. The various poses and angled shots and lighting effects makes it seem as if she is an active participant in the drama.  Of course, it’s Keenan whose attentions – some of them quite romantic, others simply curious and diagnostic – bestow life on the statuette. He dresses her, takes her for a drive through the pines, drinks and plays cards with her, holds her hand and dances with her. It’s a love story of sorts, even if it’s a weird and elusive one, and one that could only catch fire in a place as strange and intoxicating as the deep forest.

After setting such a high bar with “Heartbeats,” it’s thrilling to see The Winter Sounds deliver such a hauntingly beautiful follow up. We’re super excited to be working with Logica Sonica again to help spread the word about The Winter Sounds, Maximum Reality, and the upcoming US tour. If you’d like to check the band out live, please drop us a line and we’ll take care of the details to make that happen! Please contact Andy Gesner and the HIP Video Promo team at (732)-613-1779, email us at info@HIPVideoPromo.com. You can also visit www.LogicaSonica.com for more info on The Winter Sounds.

For info about other The Winter Sounds music videos, click HERE