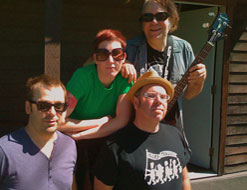 Greetings programming friends, it’s Andy Gesner and the HIP staff and we’ve got a brisk and spunky new clip from a Seattle band that bravely adds several packets of 60s era pop to their strongly brewed cup of punk rock, Thee Sgt. Major III. In effortless cannonball fury, “Ice Cold 10” will come to shatter your windows and rattle your walls with all its upbeat and kinetic glory!

What’s new is old and what’s old is new, and Thee Sgt. Major III have got quite a story for you. With a lineup that includes some of the members of old-school Sub Pop darlings The Fastbacks and celebrated Seattle-ites The Posies and the Young Fresh Fellows, this band not only sports original 80’s punk rock fashion, but has actually contributed to its formation. Not straying too far from the successful formula that has made The Fastbacks a success, Thee Sgt. Major III fuses shimmering 1960’s pop with a heavy dose of The Ramones, ending up with friendly sound that’s got quite a bite to it. One of main components here is the young and feisty singer, Leslie Beattie. She wails and roars and delivers quite a punch to the already raw backline behind her.

The video joins in the fray with attitude to match! Director Ty Huffer masterfully creates an environment that invites the viewer in and then holds them captive with a must-see clip. Taking place in a barn-meets-bar setting, the band arrives into a crowd of very villainous audience members who look like they’d rather be beating their brains out than having to listen to their songs. Striking the first several moments of the tune takes off in a hilarious Blues Brothers-style uproar, as the irritated crowd throws every bit of glass and uneaten slider chunk at the quartet, who are fortunately safe behind the stage’s chain-linked fence. However, half-way through the song, the band returns fire by jumping into the crowd, inciting a full on brawl, which in the end finds them beaten and bruised but utterly satisfied. It’s hilarious, it’s angry and it’s everything you’d want to expect from an old school pop punk song clip.

“Ice Cold 10” is the latest single off the group’s brand new clever and zesty album The Idea Factory. Seattle critics are already raving about the record, with Voice of Energy announcing that it will “turn off your brain, crank your hips,” whileBlurt claims “The Idea Factory produces megawatt ideas.” The indie blog Zap Town is also thrilled, saying it’s a “beach-side power pop roadtrip.”

We’re thrilled to be working with a band that’s got royal punk rock blood flowing through them, and hope you will find a place for this charming clip amongst your programming lineup this winter. If you’d like to do any Thee Sgt. Major III giveaways, we’ve got plenty of copies of The Idea Factory at our disposal. If you need more info, call Andy Gesner at 732-613-1779 or e-mail us at info@HIPVideoPromo.com.