The Rebellion “Grown And Sexy” 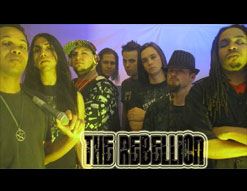 Hello fellow music lovers, it’s Andy Gesner and the staff from HIP Video Promo, here with an kinetic clip from a genuine hip-hop band. Don’t compare The Rebellion to Shop Boyz: those distorted guitars and pounding drums on The Gate 11:11 have been played by actual members of the group. No, The Rebellion’s fusion of hard rock and Southern rap owes much more to the groundbreaking work of Atlanta production teams Organized Noize and Earthtone III. The Rebellion make music for the hip-hop charts, to be sure, but this isn’t an act driven by commercial concerns. They’re experimentalists, explorers, alchemists working with highly reactive — and downright dangerous — substances.

Consider, for starters, the group’s formidable, imaginative lineup. The Rebellion are fronted by two accomplished rappers with unusual voices and sensational deliveries: the slinky-voiced Angelikenisis and the brash, mysterious Eugenius. But there’s another voice in the group, too — the hoarse, heavy-rock shouts of support singer B.G. The interplay between the rappers’ smooth verses and B.G.’s two-fisted verbal punctuation is one of the most remarkable things about this very unusual act. The live band supports the vocalists with genuine rock firepower: guitarists Byron and Abzent Minded scald, bass player B Dogg holds down the infectious grooves, and drummer J-Sin hammers it all home with poise and conviction. Add versatile turntablist and live sound-scaper DJ Ceez, and you’ve got a genre-confounding act ready to go toe to toe with hardcore rappers, headbangers, and anyone else they might happen to share a bill with.

“Grown & Sexy”, the lead single from the upcoming The Gate 11:11, showcases The Rebellion at their most urban: the beats skitter and snap, and the emcees take the spotlight. Eugenius quotes Dres of the Black Sheep, name-checks Eightball & MJG, and sets the scene, describing a gorgeous girl in an Atlanta nightspot in vivid, forceful rhymes. Angelikenisis picks up right where his partner leaves off, keeping the verses tight and the seduction simmering. Throughout, B.G. underscores the punchlines with raspy shouts of his own; it’s unexpected, distinctive, and thoroughly exciting. And as The Gate 11:11 will demonstrate, the rappers can take a support role, too: tracks like “Kingdom Of Light” highlight the band’s razor-sharp rock sound.

With his colored-contacts, piercings, and cap askew, Eugenius looks like anything but the typical rapper. In the “Grown & Sexy” video, he appears as a top-hatted magician, conjuring drinks and gorgeous girls out of thin air with a wave of his cane. Angelikenisis’s style is a bit more conventional, but still striking: hoods, shades, medallions, and some simple but oh-so-effective dance moves. When they join B.G. onstage for an exuberantly-choreographed routine, it’s simultaneously endearing and mysterious. Behind them, the band rages on, playing “Grown & Sexy” with the enthusiasm of punk kids and the confidence of studio pros.

We’re very excited to be working with the entire crew at Rockhop Records to bring you this hard hitting new clip! If you need more info, call Andy Gesner at 732-613-1779 or e- mail us at info@HIPVideoPromo.com.