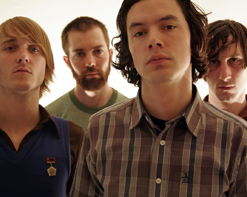 THESE ARMS ARE SNAKES

Hello fellow music video lovers! It’s Andy Gesner and the staff from HIP Video Promo coming back at you with quite a treat. These Arms Are Snakes are back with their second full length album Easter and the Seattle combo has turned up the wattage delivering a harrowing, menacing, perversely entertaining set that should satisfy the art core punks, indie purists, and experimentalists alike. Hailing from the same Northwest scene that gave the world Minus The Bear, Botch, The Blood Brothers and Kill Sadie, These Arms Are Snakes shuffle post-hardcore and math-rock elements to create a sound wholly their own. Singer Steve Snere possesses one of the most unique vocal deliveries in indie rock. Every time he opens his mouth, it’s vivid, troubling, and emotionally affecting.

Easter, the follow-up to the critically acclaimed Oxeneers or The Lion Sleeps When Its Antelope Go Home, is a jagged, apocalyptic, raging monster of an album – the sort of music that you might expect to hear inside the head of an incurable neurotic. Synthesizers hover over the acidic stew of six-string like specters; electronics and static elbow their way past the grinding rhythm section. Over it all, Snere leads his listeners on an anti-spiritual quest: statements of ambivalence and confusion about the role of religion in modern society, questions about the nature of belief.

“Horse Girl”, the lead single, is an avalanche of angular guitar and a showcase for Snere’s arresting imagery. Unashamedly cerebral, sizzling with pent energy, and wickedly confident, These Arms Are Snakes have penned a post-hardcore protest song for an ecumenical world.

The video was directed by Artificial Army, who are no stranger to bands with disquieting themes: they’ve shot memorable clips for Coheed & Cambria, the Mars Volta, and Thursday, to name just a few. But for These Arms Are Snakes, they’ve raised their game, and created one of the most chilling (and ultimately entertaining) semi-animated videos we’ve seen all year. We say “semi”, because there’s performance footage here, and the camera loves Snere in particular. The bulk of the video, however, follows an innocent pink pony on its first ride through the big city. We won’t detail the horrors that await the little animated horse there: suffice to say that after some close encounters with urban vice, she falls into a vortex that resembles a board from the video game Tempest. When she emerges, she’s been transformed into a jet black death steed shooting laser beams from her eyes! Shot to resemble an anime flick from the mid-Eighties, Artificial Army has struck upon the perfect combination of lo-fi effects and expressive animation. Their warped vision (nearly) matches the inspired artistic lunacy of These Arms Are Snakes.

We are happy to be working on this video with Tim Owen and the entire Jade Tree team to bring you this spectacular new video. These Arms Are Snakes will be on the road through the end of the year and we would be happy to help set up video interviews when they visit your market. We’ve also got some awesome Easter samplers on hand should you be interested in any on-air giveaways. If you need more info, call Andy Gesner at 732-613-1779 or e-mail us at info@HIPVideoPromo.com. You can also visit www.JadeTree.com to find out more about the band.