The Hundred In The Hands “Tom Tom” 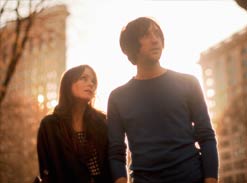 Hey there, programming friends! It’s Andy Gesner here at HIP Video Promo, bringing you a video by a duo who just recently signed on with Warp Records. In this case, we’re talking about The Hundred In The Hands, comprised of TV On The Radio collaborator Eleanore Everdell and former Boggs member Jason Friedman. Lately, it seems like Brooklyn boy-girl duos ala equally buzzed-about band Sleigh Bells are an instant recipe for success, but The Hundreds In The Hands manage to stand out in their own way with their video for “Tom Tom.”

There’s a simplicity and sense of romanticism in The Hundred In The Hands’ video for “Tom Tom.” Sure, you basically see Everdell and Friedman sauntering around a warehouse filled with amps and speakers as a big screen projects random lyrics, bright colors and images of the ocean for the entirety of the video. But this forces you to really hone in on the pair, picking up little musings on each of them as they get further into the song. It’s minimalist while still being quite expressive; visually charged while keeping up with the slow yet progressive tempo of the song itself.

Ultimately, the video for “Tom Tom” makes it about the song more than anything. Everdell’s voice is haunting while having some inherent sweetness to it, and you get a real sense of this especially when she sings, “Could have stood by you for days / I would forget the world for you.” Friedman is not to be dismissed; just watch the way he keeps up with the heavily layered percussion by playfully tapping on his guitar.

The Hundred In The Hands’ “Tom Tom” is just a taste of what’s on the This Desert EP, released only a few months ago. The EP has helped garner Everdell and Friedman some respectable accolades, which includes SPIN, NME and Brooklyn Vegan. Time Out New York described The Hundreds In The Hands quite well: “Fueled by glistening disco, tense punk and a hint of recession politics, the music springs from that sliver of the early ‘80s in which pop was personal, arty and potentially angry.” It’s evident that The Hundreds In The Hands hold their influences close – be it some post-punk, disco house or synth pop – and they will be showing what they’ve got even more when they release their first full-length later this year.

We’re thrilled to be working with one of Warp Records’ newly signed artists and helping them on their musical journey. We’re here to hook you up with copies of This Desert If you need more info, call Andy Gesner at 732-613-1779 or email us at info@HIPVideoPromo.com. You can also visit www.Warp.net to get more info on The Hundred In The Hands.