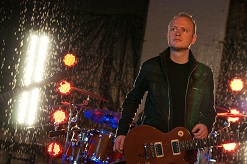 Hailing from Germany, semantic rock artist Thomas Passon breaks down language barriers in his pursuit to carry his message through the compelling music he creates. Although some might not understand his native language, the stellar techno-style rhythms and crisp production do the talking. Implementing an intense attention to detail in his music making and living by the credo “The best thing you can be in life…is yourself”, a Thomas Passon song is instantly memorable, with soaring guitars and a sonic assault that’s ingrained in your head almost instantly. He represents his country well as the listener reads in between the lines to create their own profoundly intriguing world.

Thomas Passon has spent his entire life studying his craft and perfecting it for his stunning debut release Illusion. Starting in high school, he played the guitar for a band that toured around Turkey, South America, and France, sharing his love of the German language and making it less intimidating to the foreigner. Growing out of his role as a backup, he found purpose as a solo act. Over the last ten years, he has found his artistic path and wants to take listeners along on his self-discovery journey. Accompanied by his touring band, Marc Heidermann and Elmar Schmidt, they are proud to present the final product: Illusion. To be released next month, it’s a black and white depiction that begs to be colored in by the listener.

Coming in hot, “Los” is the debut single off the album and it’s certainly hard to contain. Passon drapes himself over a black and white background with flashing lights for each transition. “Los” translates to “go”, and the song charges you with energy and sucks you into the musical milieu within twenty seconds. Taking the listener into his lyrical point of view, “Los” is about eagerly awaiting something to happen that could change your life. The rest of the album is more about the illusions of life itself, though there’s some hope in it as well.

We’re thrilled to be working with our new friend and musical kindred spirit Thomas Passon, and we hope you embrace his debut clip for “Los” as much as we have here at HIP Video Promo. We’d love to see this video added to your cherished programming and online presentations in a timely fashion, so please give a good look at it as soon as you can! For more information on Thomas Passon, please contact Andy Gesner and the HIP Video Promo team at (732)-613-1779 or info@HIPVideoPromo.com. You can also check out instagram.com/passon.thomas/ and facebook.com/thomas.passon.official/ for all things Thomas Passon moving forward.

One thought on “Thomas Passon “Los””