Time Will Tell “It Could Be Worse” feat. Nick Thompson 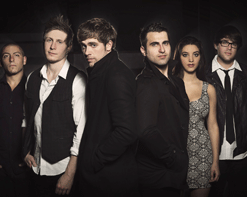 Have you ever had one of those days when it feels like universe seems out to get you? Time Will Tell’s new video for “It Could Be Worse” is a light-hearted look at the trials and tribulations of even the most mundane tasks like getting to work on time and how even when you think it’s all working against you, maybe it’s really not so bad!

The band has always seen the big picture of things since their inception in 2011. Their Facebook page lists some of their influences as “life, time, experience, perspective, pain, mistakes, lessons learned” and more. Instead of just blindly copying what others are doing they take what life throws at them and they let that be their inspiration, with the end result being infectious melodies, heartfelt lyrics, and a highly energetic live show that has landed the band spots on coveted festival slots like Warped Tour, CMJ, CBGB Musikfest and Bamboozle. They’ve also kept in mind the benevolent side of life, having participated in charity tours with The Traveling Guitar Foundation/ESP Guitars to help raise money for music programs in underprivileged schools. What’s more is that they pulled in loads of positive press for their debut EP Reflection, which they recorded with producer Rob Freeman (Hidden in Plain View, Hit the Lights, Gym Class Heroes).

It was only natural that they would once again team up with Freeman for their newest recordings. The first song from that batch is the new single “It Could Be Worse,” which features Hit the Lights vocalist Nick Thompson. The song has more hooks than Muhammed Ali, and each element shows that this band knows how to craft a finely tuned pop-rock gem. With dual frontmen Christopher Minor and Christopher Rivers leading the charge, the song swings wide from pulsating verses, soaring choruses, and a bridge that connects it all together with a multi-tiered approach.

For the “It Could Be Worse” video, Minor takes the lead role of the protagonist who just can’t seem to catch a break. It all starts with a frantic dash to get to the office on time, but one step out the door and things go from bad to weird! A passing car soaks him and a quick detour home reveals his loving girlfriend having a fetish-filled (SFW!) pillow fight complete with costumes, whips, and bandmates. So his girlfriend has a kinky side? It could be worse! How about confronting a wild gang of thugs along the way? Sounds like trouble, but in reality they’re only kids. It could be worse! Maybe a ninja attack in the parking lot? No broken bones, it could be worse! Or how about getting to the office and the doors are locked? At least the guardian bum/angel who has been there all along is there to remind him with a drink and sign that, say it with us now….. It could be worse!

We’re super excited to be working with Time Will Tell and bringing you their new video for “It Could Be Worse.” We would love to get you anything you may need to include this video in your programming, so please don’t hesitate one minute to get in touch! Contact Andy Gesner and the HIP Video Promo staff at (732)-613-1779 or email us at HIPVideoPromo@Gmail.com. You can also visit www.Facebook.com/TimeWillTellRock/ for more info.