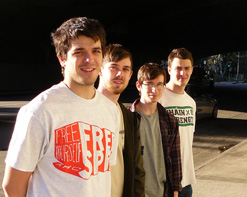 Hello ladies and gentlemen of the programming world, it’s Andy Gesner and the HIP Video promo staff with a video so gritty and hard hitting, your head will burst into pieces of post hardcore goodness. Of course, we are talking about the restless and frantic new punk offering from Title Fight titled “27.” The band has been bashing their way into the music scene, earning a spot on SPIN’s “25 Must-Hear Artists at Bamboozle” list. The band’s presence has been increasing in the nation’s hardcore scene, with constant mentions onAbsolutePunk, Punknews, and Alternative Press. Title Fight’s fanbase has grown tremendously over the last several years as they have toured the United States with bands such as New Found Glory, Bayside and Senses Fail, while also becoming a regular on the hardcore festival circuit playing such fests as This Is Hardcore, United Blood and Sound and Fury. The band recently did a run in Japan with H20 as well.

“27” is the latest single from Title Fight’s brand new album Shed, which has just hit stores and online retailers this May. Already, the record reached the #8 spot on the New Artists Chart on Billboard. The band is currently on a headlining tour supporting their SideOneDummy release across the country. We urge you to not only feature this clip, but to come out to see the band perform on a date near you. Just let us know if you are interested in seeing the band in person or featuring them in an interview segment, and we will make it happen.

“27” is a back-to-basics masterpiece that hits hard and doesn’t apologize for it. The song finds the band at their very rawest as they draw inspiration from bands like Jawbreaker, Kid Dynamite and Lifetime. You will not find any keyboards, auto-tuning, or endless layers of production here, just guitars, bass, drums, and a strained vocal delivery. From the very first listen, it is easy to see how the band has earned so much credibility in the scene in such a small amount of time. This sort of dedication to their craft has earned them excellent reviews across the board, including a high scoring feature fromAbsolutePunk, which states that the band is “as frantic and urgent as ever while also expanding their sound.” The new album was one of Alternative Press’s most anticipated this year and received 4.5/5 stars from the magazine. Shed has also received near perfect marks form Punknews, Kerrang and Rock Sound.

The video for “27” is just as raw as their sound. The entire clip was filmed with the same VHS camcorder that the band used for the filming of their documentary for the making of Shed. The clip takes place in a house with enough bad luck omens to give a superstitious person an instant heart attack and drive him/her into a paranoid frenzy. The clip features the band performing in a living room as a black cat constantly crosses their path. To make things scarier, the band brings in a ladder into the house, walking under it. Then to top it all off, the Title Fight guys truly test the pagan gods by opening up umbrellas while performing in the living room. One certainly has to appreciate the band’s courageousness for taking on these feats for all to see.

We are absolutely thrilled to bring you a band that will be filling rooms with sweaty punk rockers for years to come. Join us in exposing this ambitious and talented SideOneDummy act. The folks at SideOneDummy and Title Fight have provided us with lots of copies of Shed for your listening pleasure and on-air giveaway needs. If you need more info, call Andy Gesner at 732-613-1779 or e-mail us at info@HIPVideoPromo.com. You can also visit http://www.SideOneDummy.com, or http://TitleFight.tumblr.com to find out more about Title Fight.