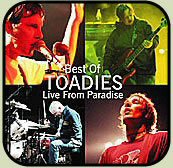 Toadies have traveled a long road, from friends working in a local record store, just learning to play, to 90’s independent hitmakers, to elder statesmen (and stateswoman). Founded in late 1988, Toadies rose to prominence on the strength of their titanic alterna-hit “Possum Kingdom”, from the platinum-selling Rubberneck album. Toadies lit up the charts and stages across the world in the mid to late nineties with killer hooks, passionate song writing and always remained a fav amongst college radio programmers and the then growing indy rock denizens. Throughout their salad days, when they ushered in an alternative to the “grunge revolution”, to their MTV heyday and beyond, they personified both the eternal spirit of rock n’ roll and the indie zeitgeist: “to give up my 401K and live in a van”.Live From Paradise is a long-overdue live recording from a band that has always been at its best before an appreciative and enthusiastic audience – fittingly captured at a show at Boston’s long-time rock mecca, The Paradise.

“Tyler” is a Toadies signature tune, purely visceral from the first notes of Clark Vogeler’s sparse but compellingly riffy guitar line (an amalgamation of Television and The Pixies). This version glows and glares like a tungsten filament subjected to too much current. Director Fabio Jafet captures a performance that is adrenaline fueled yet tightly and seemingly tenuously controlled. Todd Lewis’ taut and vaguely menacing vocals as he “rummages through the refrigerator” juxtaposed with Lisa Umbarger’s incessant and insistent bass line give this video a gritty and almost subterranean feel that lurches out and grabs the listener.

To celebrate the release of the Toadies new CD and video, Aezra Records and HIP Video are hooking up any programmer that adds the very cool “Tyler” video for the add dates of February 21st and 24th. Each programmer will receive a Toadies prize package containing copies of the new live CD, posters and other cool Toadies stuff to give away on their show. All programmers will then enter a drawing to win the complete Aezra Records catalog (Deep Blue Something, Robin Trower, Before Braille etc.) along with huge 24 x 38 autographed Toadies posters. Call Andy Gesner at Hip Video at 732-613-1779 or e-mail info@HIPVideoPromo.com for more details. The contest drawing takes place March 31st.

Toadies are best experienced in person, but if the “Tyler” video is as close as you can get, count yourself fortunate.