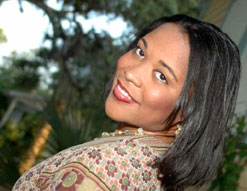 Howdy! It’s Andy Gesner and the staff from HIP Video Promo, here to introduce you to a magnificent new devotional voice. The title of the latest Toni Rackard CD is, superficially, confrontational – the soulful vocalist calls the set Are You Ready For War? But when the R&B and gospel artist begins to sing, it’s nothing but the purest sweetness. A contradiction? Not at all. Toni Rackard isn’t threatening anybody – she’s asking her audience whether they’re prepared for the spiritual struggle that confronts us all. She’s wondering whether her listeners are sufficiently armed with faith, and whether their relationships with the Almighty will weather life’s hardships. On “I Can See The Light”, her beautiful new single, she sings emotionally about her own trials, and reassures us that God’s presence and guidance is palpable for everyone who seeks it.

It’s a message she sends regularly from the Jesus People Family Worship Center in Tampa, where she’s the Praise and Worship Leader and resident psalmist. Recent wildly-successful shows at churches all throughout central Florida have demonstrated the power of Rackard’s voice and the universal appeal of her songs. Rackard has also collaborated with Marvin Winans, Jr. on a duet, and could be nominated in up to five categories in the Stellar Gospel Music Awards. On top of that recently she has been featured on nearly 100 radio stations, and was even chosen to tour across Italy, France, and Russia with the Harlem Choir. There is clearly a ton of buzz surrounding this emerging new star.

“Unconditional Love”, another featured track from Are You Ready For War?, describes her desire for a closer relationship with God in language both frank and immediately identifiable. Other tracks on the set – like the jazzy “Lovely Day” and the propulsive “Let Us Dance” – allow Rackard to stretch out and show her musical flexibility. Her talent is apparent, but she doesn’t coast on it: she always remembers to put her devotional content first. The sincerity of her mission is undeniable, the conviction of her performances is palpable, and the sound of her radiant singing is positively heavenly.

As anyone who has seen Toni Rackard sing in church will tell you, she’s a charismatic presence onstage – and that translates to the videos she’s made for Are You Ready For War? In the cinematic clip for “I Can See The Light”, Rackard plays the role of comforter: she’s telling the story of a couple in peril, separated by distance, but holding their family together with a helping hand from the Almighty. A young woman with a small child waits at home by the telephone; as the television news plays in the background, she’s tearful but unbowed. Her husband is in Iraq, and struggling with the burdens of war – but just as it seems like he’s lost all hope, he’s pulled to his feet. Toni Rackard delivers the song with astonishing grace and compassion for these characters: she acknowledges their doubt, and reminds them that their faith will be rewarded.

The “Unconditional Love” clip comes as a bonus on this reel, but really, it’s more than that: it’s a reinforcement of Rackard’s message. It’s also an excuse to show off the singer’s hometown of Tampa – on a clear blue summer day, she sings in front of a gorgeous Floridian house and takes a stroll around a well-manicured lake. The funky “Unconditional Love” catches Rackard in a celebratory mood, and it’s an infectious one – catchy enough to land this gospel singer on urban radio.

We are stoked to be working for the first time with the wonderful folks at Behind The Veil Records to bring you two top notch videos from Toni Rackard. If you need more info, call Andy Gesner at 732-613-1779 or e-mail us at info@HIPVideoPromo.com .