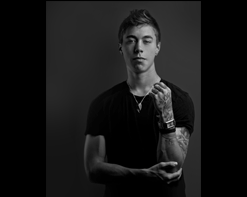 Influenced by a multitude of contemporary artists such as Macklemore, J. Cole, Lupe Fiasco, and Linkin Park, Top Flight is blending a vast array of styles and inspirations to create one of the most exciting new musical creations. Blending hip-hop, pop, and rap music genres, Top Flight’s music is setting the music scene on fire with his third single “Just Pretend.” From the acclaimed mix-tape Simply Complex, HIP Video Promo is pleased to introduce his forthcoming video clip.

Raleigh, North Carolina’s own Krieg McClure is surely a self-proclaimed artist. With years of songwriting experience under his belt, he has just begun the process of getting his feet wet. Geared up and ready to go, the team behind Top Flight’s musical endeavors consist of well-rounded and motivated individuals at Fleet Records including Will Sherrer and Ben Packard manning the ship. The team constantly works together to provide outstanding assurances for artists like Top Flight.

During his most recent tour throughout Florida, Top Flight has opened up for artists like MGK (Machine Gun Kelly) as part of the Raise The Flag Florida Tour. Live performances are alive and energetic, and you get to see a glimpse into Top Flight’s enigmatic performances in “Just Pretend.” HIP Video Promo and Fleet Records present a video that is raw and gripping, and will leave you wanting more.

Filled with mesmerizing lyrics, “Just Pretend” is a song that really leaves Top Flight out in the open. As a hip-hop rapper on the rise, his rhymes are emotional and hit home, yet all together they promote the individualistic approach of Top Flight’s demeanor. The video is slick combination of gritty scenes of Top Flight spitting rhymes and making his way through a non-descript cityscape, with a concentration and focus second to none. It all comes to head as we see the transformation from vagabond to superstar. Instantly filled with color and an onstage performance filled with infinite energy, the video is a reassurance that this really is not “Just Pretend.”

This genuine rapper combines truth and wisdom in his inspiring music video “Just Pretend.” For more information on Top Flight, be sure to contact Andy Gesner and the HIP Video Promo staff at (732)-613-1779 or email us at info@HIPVideoPromo.com .