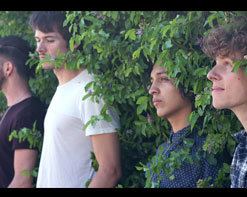 We’ve told you the story of how Skylar and Merritt from Trapdoor Social came together after meeting in an Environmental program at Pomona College and bonding over a shared concern for the future of the planet. Since then, Trapdoor Social’s Merritt Graves and Skylar Funk started off on a journey to make some important music and do some good along the way.

They’ve already made significant waves with their previous two videos “Science of Love” and “Fine On My Own.” they have a BUNCH of prior videos, all can be seen on their site  All of them showcase the unique styles of Graves and Funk, as well as showcasing the incredible songwriting from their Science of Love EP. Their benevolent side was on full display with the “Fine On My Own” single, which donated all profits to the Pride of Mesa Ridge marching band from Colorado Springs, CO, whom they met while touring the US.

As they work on their next album, Merritt and Skylar decided to release two discs worth of previously recorded songs that haven’t seen light of day. Merritt’s album is Download My Dream and Skylar’s is Kid in the Sky. They’ve also been investing a substantial amount of time curating their own Sunstock Solar Festival. Sunstock is a solar powered festival of music, art, and action which is taking place on June 18th at the Autry Museum in Los Angeles. In preparation for this big summer ahead, they’ve released their new video for “Second Chance,” which has all of the mindbending visuals of “Science Of Love” and the social consciousness of “Fine On My Own.”

In “Second Chance,” Trapdoor Social dives headfirst into the digital world of video games and the sometimes impossible task of separating reality from the screen. Merritt takes up the lead role in this clip, playing a person whose world is so consumed by his video games and alternate worlds that he’s the victim of his own imagination. It begins with him trapped inside a room, and only the wild characters of his imagination are there to help him escape. This in-a-dream adventure is full of action and adventure, and only Merritt’s real-world version of himself seems to be able to pry fantasy from reality.

We’re all extra excited to be working with Trapdoor Social once again to bring you their unique brand of alternative pop rock music. We would love to tell you all about Trapdoor Social, Download My Dream, and the upcoming Sunstock Solar Festival, so please don’t hesitate to hit us up! You can contact Andy Gesner and the HIP Video Promo crew at (732)-613-1779 or email us at info@HIPVideoPromo.com . You can also visit http://www.TrapdoorSocial.com/.

For info about other Trapdoor Social music videos, click HERE