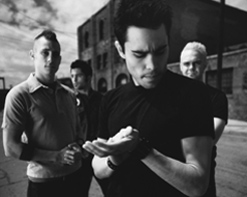 Greetings to all my comrades in music video land! It’s Andy Gesner and the staff at HIP Video Promo here to serve you a hearty helping of hard rock. It’s no exaggeration to say that Trapt has been one of the most successful hard-rock bands of the decade – and that they’re just getting started. They’ve released two albums so far, and both have gone gold; highlights from Trapt and Someone In Controlhave become modern rock radio standards. “Headstrong”, their lead single, topped the Modern, Mainstream, and Alternative Rock charts, and even crossed over into the U.S. Top 20. The song went on to win Billboard awards for Best Rock Track and Best Modern Rock Track of 2003. Subsequent singles have won chart success, too: the moody “Still Frame” reached the top of the Mainstream Rock charts, and “Stand Up”, the lead track from Someone In Control, nearly matched that feat. Throughout their career, Trapt has placed cuts on soundtracks for video games, given theme music for the WWE’s Bad Blood, and even wrote the song that the Toronto Maple Leafs use for their warm-ups at the Air Canada Center.

One thing they’ve never done, though, is put out a live album. This is, perhaps, surprising, because Trapt is generally acknowledged as of the fiercest modern rock bands, and one of the few disciplined enough to play shows that sound as tight as a studio album. With the September release of Trapt Live, our friends at Eleven Seven Music will be supplying the remedy. “Stay Alive”, the first single from the set, sounds to us like another radio smash for the band. It rides in on a tricky minor-key guitar figure before combusting into firestorm of distortion, heavy drums, and six-string feedback. As always, singer Chris Brown sounds keen, powerful, and forthright: even when he raises his voice to a shout to compete with the guitars, he never fails to carry the melody. No wonder, then, that Trapt has been praised by critics who do not normally care for aggressive music – this is a hard-rock band for all listeners.

They’ve also made consistently intriguing videos; even their live clips have always been conceptually-sophisticated and beautifully staged. But although it contains footage of Trapt in action, the “Stay Alive” clip is not primarily a performance video. Instead, the quartet has asked animator and graphic designer Miles Kalbach to bring their dark fantasy to life. Kalbach’s plasticine claymation is the farthest thing from kid’s stuff: rather, it is a haunted, emotionally-bare narrative reminiscent of Tool’s landmark clips from “Undertow” and “Aenima”

The “Stay Alive” clip opens in a tight little room with checkerboard floors; on the walls, tiny screens project footage of Trapt in performance. A ball of white plasticine roils atop a pedestal in the center of the chamber – and we watch it gestate, mutate, and change form before taking on a vaguely humanoid shape. Before settling into its final form, the restless spirit in the clay becomes a dog, a centaur, and an angel. But when its shape finally settles, we see that it’s a torso without legs. With a mighty effort, the little statue heaves itself off of the pedestal, and, using its arms, it motors around the room, looking nervously up at the walls. Its vulnerability is dramatically underscored when another clay figure enters the room: a predator, which chases the spirit from chamber to chamber. Can the plasticine man stay alive, or will he be crushed, dissipated, his form and energy lost?

We are proud to be championing the sonic blitzkrieg that is Trapt, and thanks to Jason Spies and Sam Alpert for bringing us on board for this promotion. If you need more info, call Andy Gesner at 732-613-1779 or e-mail us at info@HIPVideoPromo.com. You can also visit www.10thst.com or www.Trapt.com to find out more about Trapt.