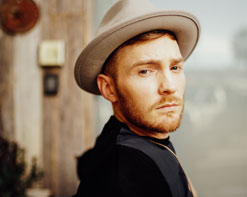 He’s a gentleman and a girl-chaser, a warm-hearted soul with a devilish streak, a talented piano man who knows his way around a digital audio suite, and a passionate love man with a genuine sense of humor about himself. His music is a dazzling collision between the old and the new, the proper and the sleazy, ingratiating pop and attention-grabbing hip-hop and soul. Young Trevor Wesley has emerged from Southern California with a distinctive musical personality, fully formed and ready for prime time — and the rest of the world is catching on fast. In 2015, he lit up the Internet with the independently released “Chivalry Is Dead,” a widely-shared track played millions of times on YouTube. After releasing an album of the same name, Wesley has returned with a gorgeously shot, exquisitely appointed, and downright suggestive new video for “In This World”, and it seems certain to make the viral success of “Chivalry” look like a mere prelude.

He’s brought a friend to the party, too: Raven Felix, the Taylor Gang-affiliated emcee whose swaggering rhymes have made her a staple of the California rap underground for the past few years. Raven’s confident featured verse on “In This World” is a wonderfully wicked counterpoint to Wesley’s heavenly singing and a lascivious, instantly catchy chorus that features sped-up voices, a gang chorus, and an awed performance by the star about the wonders of buttocks in motion. Yes, Wesley might have the liquid voice of an old-fashioned pop star, but his fascinations are decidedly contemporary (and identifiable, too).  He’s after the booty — and as polite as he might sound, he makes his desires manifest.

That tension between the traditional and the modern — the hypersexual and yes, the chivalric — is palpable in all of Trevor Wesley’s projects, and it’s part of what makes his music feel so refreshing. He’s earned his irreverence through his self-awareness, and scrupulous attention to detail. It’s not hyperbole to say that the clip for “In This World” is the sort of thing viewers expect to get out of a veteran entertainer — a video oozing attitude and sex appeal, and a colorful, combustible array of images in which each frame is a distinctive provocation. Wesley plays the owner of a handsome old Southern manor house, and he dresses the part, too, sporting threads that might have come straight from a top-notch Charleston tailor in the nineteenth century (naturally, he makes them look fashionable.) Every corner of the mansion is perfectly decorated in period style, and the video takes pains to show it off in all its opulent glory. Yet the people in the mansion — some shady-looking characters, a salacious old butler, and dancing girls in extremely revealing outfits — suggest a version of the Old South heavily spiked with the flavor of the New. Wesley, who never breaks character, even shows himself to be a good sport on the croquet lawn — although it’s clear that he’s far more interested in his blonde playmate’s behind than he is in running up the score.

Here at HIP we’re thrilled to be working with Trevor Wesley to bring you this fully realized, must-see clip. If you need anything from us Trevor Wesley related or related to the new “In This World” music video, please don’t hesitate to get in touch. You can contact Andy Gesner and the entire HIP team by calling (732)-613-1779 or emailing us at info@HIPVideoPromo.com. You can also visit www.TrevorWesley.com for more info on Trevor Wesley.