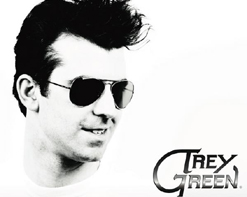 Howdy friends! It’s Andy Gesner and the staff from HIP Video Promo, here with a brand new one from a clever Bostonian songwriter with a perfect look and stance for the world of music video. Coming on strong with sunglasses and attitude, Trey Green cuts an impressive figure; behind the microphone, he’s got the swagger and easy confidence of a pop star. And then he starts to sing – and as he does, he undermines all audience presuppositions.

Green performs songs about combat pilots, voyeurism in France, and the beauty of his own backside. Songs and styles are made intentionally incongruous: “Tavarua” is a Pearl Jam-like stormer about a beach in Fiji, and “Smooth Breakdancing Man” is done as a heartland rocker (and dedicated to a woman whose “ass shines like the sun”). Much of this is pure comedy, and make no mistake, Trey Green is a very funny guy. But there is a way in which the singer is in deadly earnest even when he’s at his most absurd – and that might just be the most appealing, entertaining, and unexpected thing about him.

“My Girlfriend”, his lead single, is Green at his most outrageous – a tale of a woman so out of control, she’s liable to drive his automobile straight into a topless bar. Green’s girl is dynamite in bed, but she’s impossible to manage elsewhere: she flirts, drinks, does drugs, and generally misbehaves. The track is the sound of the singer throwing up his hands; he doesn’t know how much more he can take, but it’s clear he’s willing to stick around to find out. On “My Girlfriend”, the music matches the content perfectly: Green and his band strut their way through a catchy pop-rock confection that sizzles with raw energy. The singer’s intonation and delivery makes clear his bemusement, exasperation, and desire; his comic timing does the rest.

That stage presence is on display in Alex and Chris Browne’s rowdy clip for “My Girlfriend”. Trey Green leads his band with levity and élan; and no matter how wild the party gets, he dominates every performance shot. The Green band has taken the stage in an old legion hall or auditorium – the musicians, the singer, and his vexing girlfriend are all there to participate in a shadowy AA-type meeting for those battling the demons of drugs and alcohol. (Right off the bat, it’s clear there’s something shady about this revival – the price of the plan is absurdly low, it’s named the T.R.E.Y., and the spokesman asks any member of law enforcement to leave the room.) Although his girl attempts to hold him back, Green is the first to testify, and by the time he’s taken the podium, he’s got his guitar in hand and he’s ready to rock. And before “My Girlfriend” is even halfway over, the buttoned-down meeting has become a bacchanalia, with beautiful girls dancing with each other, and hanging on the singer’s every snarky word.

We’re very pleased to be working with Trey Green to bring you this incredible new clip. We’ve also been hooked up with plenty of copies of Trey Green’s self titled full length and other goodies for all of your on-air giveaway needs. If you need more info, call Andy Gesner at 732-613-1779 or e-mail us at info@HIPVideoPromo.com.