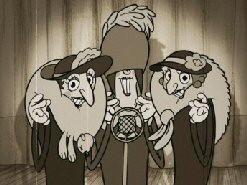 Happy New Year everybody! It’s Andy Gesner and the staff at HIP Video Promo checking in with yet another strange and wonderful video from our quirky cohorts at Higher Octave Music. The same folks who brought you Sasha Lazard and Shakatura in 2003 are kicking off 2004 with a unique and unforgettable vid from the soundtrack of an internationally acclaimed motion picture.

M’s (Mathieu Chedid) “The Triplets From Belleville” is a bright, uptempo bit of acoustic swing jazz, the theme song for a film of the same name. While M’s vocals are delivered with a thick Gallic accent, the musical style is closer to English Music Hall (if you were wondering, this M is the same M that penned the smash hit “Pop Muzik” in 1979). His most recent album entered the French charts at number one and M is still regarded as a huge star in his homeland. Thomas Dutronc’s guitar playing is both scorchingly hot and surgically precise. As M sings to his shrink about various exotic locales where he’d like to spend his old age (Acapulco, Honolulu, Timbuktu, and so on…) we are treated to a pair of appropriately costumed M simulacra dancing. The live action sequences, even with the dancing puppet special effects, have a sepiatoned Lumiere Brothers silent movie look to them.

The hook is insatiable, the aesthetic winsome and whimsical. It is decidedly French in every respect, but the urgent, compelling vocal cadence is so engaging that even the most staunch France-bashers will find themselves humming the chorus after only one or two listens. It is difficult to get this bouncy, vibrant melody out of your head.

Most eye catching and attention grabbing, however, are the animated sequences featuring “The Triplets from Belleville”, a trio of swinging grannies (voiced by Betty Bonifassi, Marie-Lou Gauthier, and Lina Beaudreault) who can improv hot riffs on refrigerator shelves, a vacuum cleaner named Mouf-Mouf, or teapots and soup kettles, joined by the animated M and their faithful hound, Bruno. The animation is drawn in a style most akin to Euro-cartoon, although aficionados might also notice the influence of Tex Avery and the cinema of Jaques Tati. The clip even features a short, cartoonish tribute to famous Gypsy guitarist Django Reinhardt.

The film, which was produced for the most part in Quebec, was nominated for a palme d’or at the ultra-prestigious Cannes Film Festival in 2003; and has played to universal rave reviews in the UK as well. Currently American filmgoers (and critics alike) are buzzing about the film, especially in New York and Los Angeles where the movie is creating a swell of earnest grassroots support.

Here at HIP Video it’s always a great kick to work with Al Risi and our good friends at Higher Octave Music. The vids are always unusually charming and a great break from the straight ahead rock and roll action we champion at HIP on a regular basis. We find Higher Octave’s integrity, vision, and courage in nurturing and supporting artists far outside the mainstream genuinely inspiring, and their keen ear for musical magic has become increasingly rare in today’s “profit margin” fueled music industry.

We want to make sure all your M and Triplets needs are attended to in a timely fashion. We have copies of the Triplets of Belleville soundtrack for on-air giveaways. Please get in touch with Andy Gesner at 732-613-1779 or e-mail info@HIPVideoPromo.com for tickets to the movie for you and for your viewers when it plays in your area. To learn more about the movie, visit www.bellevillerendezvous.com – a wondenderful site and loads of fun! Please check out www.HigherOctave.com and find out more about all the amazing artists from all over the world that call Higher Octave home.